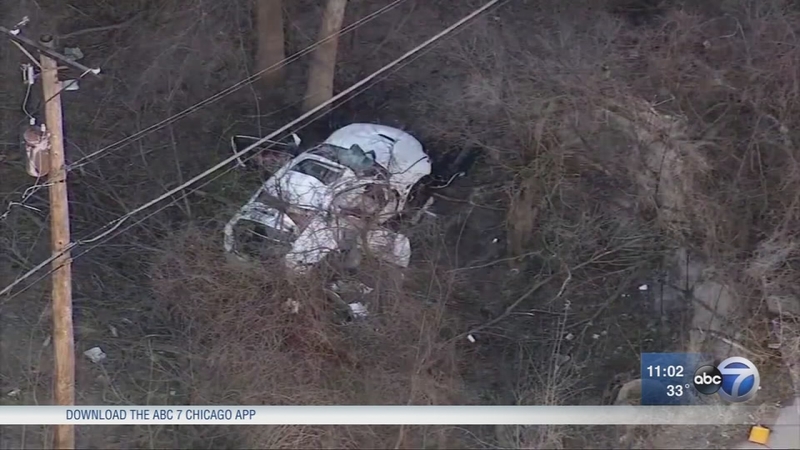 DES PLAINES, Ill. (WLS) -- A woman was injured in a crash in north suburban Des Plaines and police found a second crash victim wandering in the woods hours after the crash Monday morning.

Fire officials believe the car was going at a very high rate of speed. At around 2:20 a.m., fire crews responded to the crash at Rand Road and Ballard Road.

First responders had to pull a woman from the twisted wreck, but police said her boyfriend was missing. She was transported to Lutheran General Hospital.

"When units responded to the scene, a single woman was found within the vehicle. She was in the front passenger seat. There was no one in the driver's seat," said Michael Heidkamp of the Des Plaines Police Department.

Canines, police and fire crews searched the area for about five hours until an ambulance responded to the back parking lot of the Chicago Behavioral Hospital, a few hundred yards away from the crash site. Employees there called 911 to say they spotted a man with no shoes and no coat with several cuts and bruises.

"He wasn't suffering from hypothermia when we found him, so it does appear at some point he found shelter. There's some investigation going as to exactly how that happened," Heidkamp said.

Police believe the man left his girlfriend in the wreck and wandered away. She initially told police she thought her father was inside the car, but investigators found out he had been dropped off before the crash and she didn't remember.

Police said speeding and other possible charges are pending.

"Leaving the scene, if...this gentleman is the driver, he left somebody, and made no contact for hours, those are possibilities," Heidkamp said.

The crash snapped a power pole in two and the damage to the power pole left 300 homes in the dark.