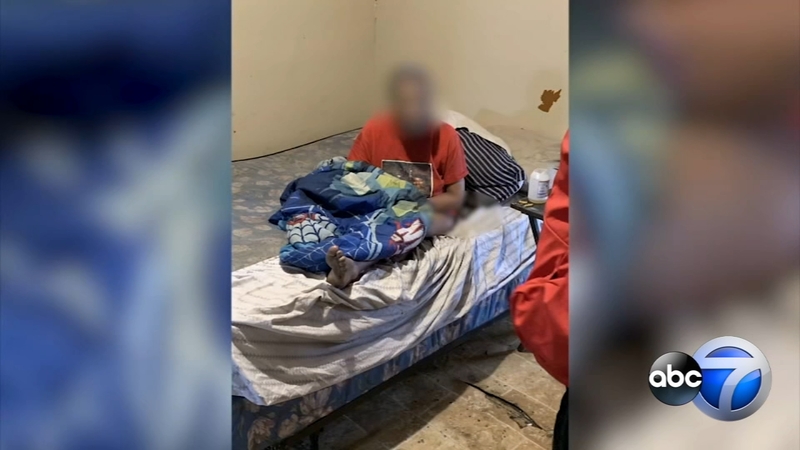 DIXMOOR, Ill. (WLS) -- A woman is accused of neglecting her elderly mother and eleven children who were found living in "deplorable conditions" at a home in south suburban Dixmoor.

Chiquita M. King, 32, is charged with a felony count of abuse or neglect of an elderly person and two misdemeanor counts of child neglect, according to the Cook County state's attorney's office and court records. Police said King is responsible for her mother and five of the children.

Charges have been filed after police discovered 11 children and an elderly woman living in deplorable conditions at a home in south suburban Dixmoor.

A non-occupancy order was placed on the home, located in the 14200-block of Lincoln Avenue, after police removed several children ages 2 to 12, along with their grandmother, on Monday. All of them were found living in squalor and were the victims of severe neglect, authorities said.

"Here's an elderly lady that's laying in a bed with a soiled diaper on, that hasn't been changed. There's no food in the refrigerator," Dixmoor Police Chief Ron Burge said.

Police said when they entered the home Monday, they found six children inside the house, along with five others who later tried to enter while officers were on scene.

About a dozen children and an elderly woman were removed after being found living in "deplorable" conditions at a Dixmoor home.

After waiting for the Department of Child and Family Services to arrive for three hours, and still unclear as to what all their relationships were, investigators took them all to the police station. Police said an empty fridge and comments made by the children indicated they needed to be fed.

"We fed them last night, pizza and pops," Chief Burge said. "You'd thought they had a big party. From their conversations, at one time they called their mother a few days ago and stated that they wanted some food. And she told them not to call her, she was getting her hair done."

Investigators took King and Davis into custody on Monday.

Four children were eventually released to their parents. DCFS placed the remaining seven children who lived in the house into the custody of relatives, while their mothers are investigated. The police chief expressed dismay with the situation as he believes those relatives were aware of the children's plight.

DCFS Spokesman Jimmie Whitelow said "some members of the household" have had prior contact with the department, but did not provide further details.

Illinois Department on Aging spokesman Michael Dropka said one of the department's contracted agencies helped police remove the elderly woman from the home. He said the department has not had any prior interactions with the family.

Davis appeared in court Wednesday before Judge Lisette Catherine Mojica, who set her bail at $30,000, according to Cook County court records. Her next court date was set for April 22.

King appeared in bond court Thursday afternoon, where a judge set bail at $100,000. She is not allowed to go near the children or elderly woman.