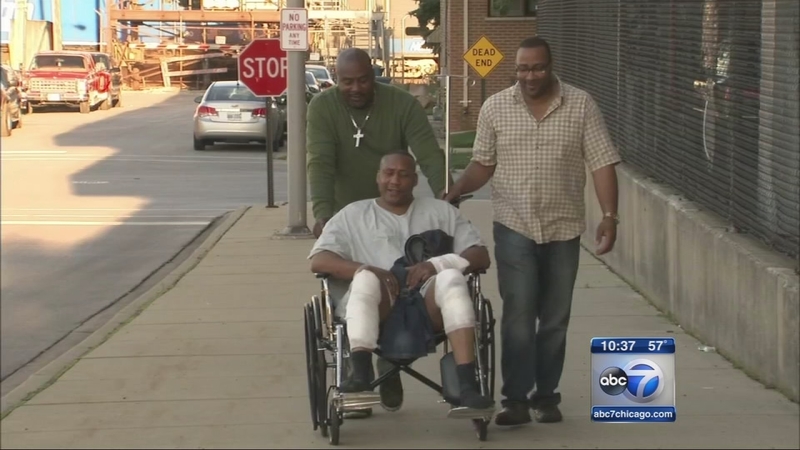 CHICAGO (WLS) -- A former Olympic boxer fought off a pit bull as it viciously attacked an 8-year-old boy on the city's South Side Saturday.

The attack left the boy seriously injured, but he is alive thanks in large part to Danell Nicholson.

"I was getting in my truck and I saw, well, I heard first, screaming from a little kid," Nicholson said.

Nicholson is out of the hospital after fighting off a pit-bull that attacked the boy around 2 p.m. Saturday on the 100-block of East 90th Street in the West Chesterfield neighborhood.

"When I turned around I saw the dog had a little kid on the ground on the street," Nicholson said.

Nicholson recognized the boy as a friend of his niece's. A former 1992 U.S. Olympic team boxer, he raced to help, but soon found himself being attacked as well.

"I'm trying to get the dog off him, so I finally got the dog, beating him off him, the dog attacks me," he said. "Luckily I had some kind of skill boxing. It really helped me out of that battle."

Initially, both the boy and Nicholson were taken to Metro South Hospital in Blue Island, but boy's injuries to his leg were serious enough that he was brought to Christ Hospital for further treatment. Officials say he may have permanent damage to one of his legs.

Nicholson received various injuries to his arms and legs, but is expected to recover.

Police say it's not clear how the dog became lose, but that he belongs to a 73-year-old resident of the area.

The dog's owner was cited for failure to restrain the dog and for not having a dog license. Animal Control was called, but it is unclear whether they have taken custody of the dog.