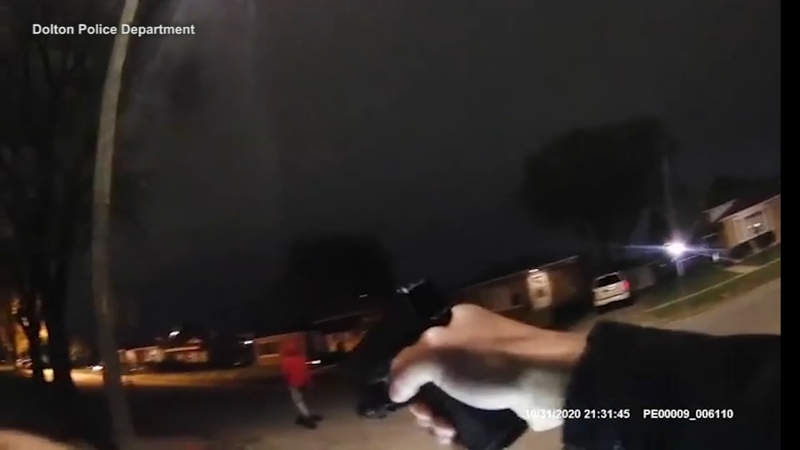 DOLTON, Ill. (WLS) -- Bodycam footage of a Dolton police shooting of a teen on Halloween night was released Friday.

Carterris Doty, 19, of Ford Heights, was critically wounded when officers opened fire after repeatedly asking the teen to drop a gun, police said.

Police responded to a neighborhood in the south suburbs after someone gave a very specific description of Doty when they called to report a man with a gun near 151st Street and Irving Avenue around 9:15 p.m. on Halloween.

In the video, Doty can be seen continuously walking away from the officer, crossing the street, and then into a nearby neighborhood. All while acknowledging officers and engaging, but seemingly not obeying their repeated commands.

Dolton police said two other officers show up as backup, and body camera footage shows that they too followed Doty with demands, sometimes while pointing their guns at the teenager.

After several minutes, the bodycam footage appears to show Doty lift his hand, despite warnings. Then you can hear two officers fire shots.

"When the subject turned around here and he had his hand on the weapon in his waistband. At that point it's like, who's the quickest draw," said Mayor Riley. "They took an extended amount of time to try and get the offender to drop his weapon."

Both officers fired several times as Doty dropped to the ground.

"Why so many gunshots? Officers are trained to fire until the threat is extinguished, and as you can clearly see in the video the offender, even though he had been struck several times by the officer's bullet," Mayor Riley said.

Officers are then seen kicking away what police said was a gun as Doty laid on the ground in pain.

A witness also recorded a video from the incident. ABC7 has frozen the video just before Doty was hit, but you can hear the number of shots fired.

Carterris Doty, 19 was seriously wounded after a police-involved shooting in Chicago's south suburb of Dolton Saturday.

Doty is still hospitalized as of Friday night.

"I haven't spoken to my son since Halloween night, the night of the incident," Doty's mother, Patrice Eason-Watson said. [I] didn't know he had a gun until today."

His mother said he has suffered from mental illness for years and likely didn't understand police officer's commands. She added that while he is badly injured, he is expected to be okay.