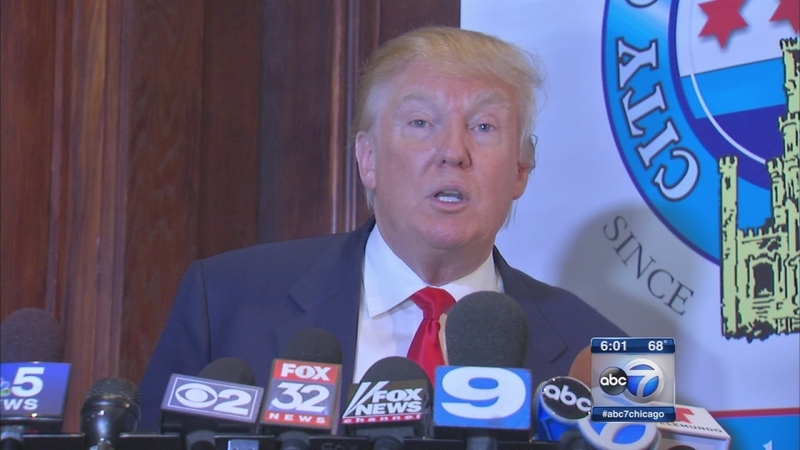 At least 2,000 people were on the waiting list to see the Republican presidential hopeful on Monday, but only about 350 people got a ticket. The City Club president said Monday's ticket was one of the most sought-after in club history.

The City Club says it sold out for Donald Trump in 15 minutes, and that thousands were turned away. To that, Trump opined, "You should have gotten a bigger venue."

"The other day I was in Maryland, we had a record crowd. We're having record crowds no matter we go. And I think it's because I tell the truth," Trump said.

But the truth according to Trump has raised the ire of many offended by his claim that border crossing Mexican immigrants are "bringing drugs, bringing crime, they're rapists."

"That is so disgusting, and to hear those words from a presidential candidate. Oh my goodness, that hurts so much," said Javier Salas, a protester.

"I still can't believe he had the audacity to say that about Mexican people when obviously he has so many Mexican people working for him," said Kimberly Yanez, a protester.

Roughly 100 protestors gathered across the street while Trump, in his speech, said at least a half dozen times that he loves the Mexican people, but our border is a sieve, and that to correct that, he would build a great wall and have the Mexican government pay for it.

"I love the Mexican people, but no apology, because everything I said is 100 percent correct. All you have to do is read the newspapers," Trump said.

Politicians, Trump said, do nothing but talk. Our elected leaders are considered clowns in the international community, and that "we have to be less politically correct."

The Spanish language network Univision has already cut ties with Trump's Miss Universe contest, and during his speech, NBC cut the cord with Trump's show "The Apprentice", although the candidate had earlier said he was leaving the show to run for President.

"I think as far as, ending the relationship, I have to do that. Because my view on immigration is much different than the people at NBC," Trump said.

Trump later issued a written statement that NBC is "weak" and "foolish", and hinted at a court fight.

Window washers gathered at Trump Tower Monday afternoon to march in support of a wage increase, but SEIU leaders said they chose the tower because it is a big building with a lot of windows.