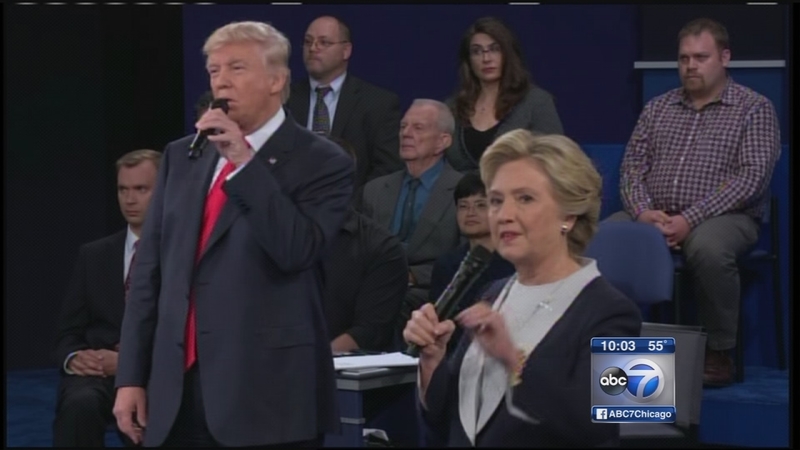 Round two of the presidential debate lived up to its billing. Trump and Clinton held nothing back in St. Louis.

There was tension as the debate began. There was no handshake between the candidates as they arrived on stage. There was no discussion about Trump's comments last Friday until after the second question was asked. It was the first time Trump faced questions since a recording surfaced of him making sexual comments about women.

"I'm very embarrassed by it. I hate it, but it's locker room talk," Trump said.

"He said the video doesn't represent who he is, but I think it's clear to anyone who heard it that it represents exactly who he is," Clinton said. 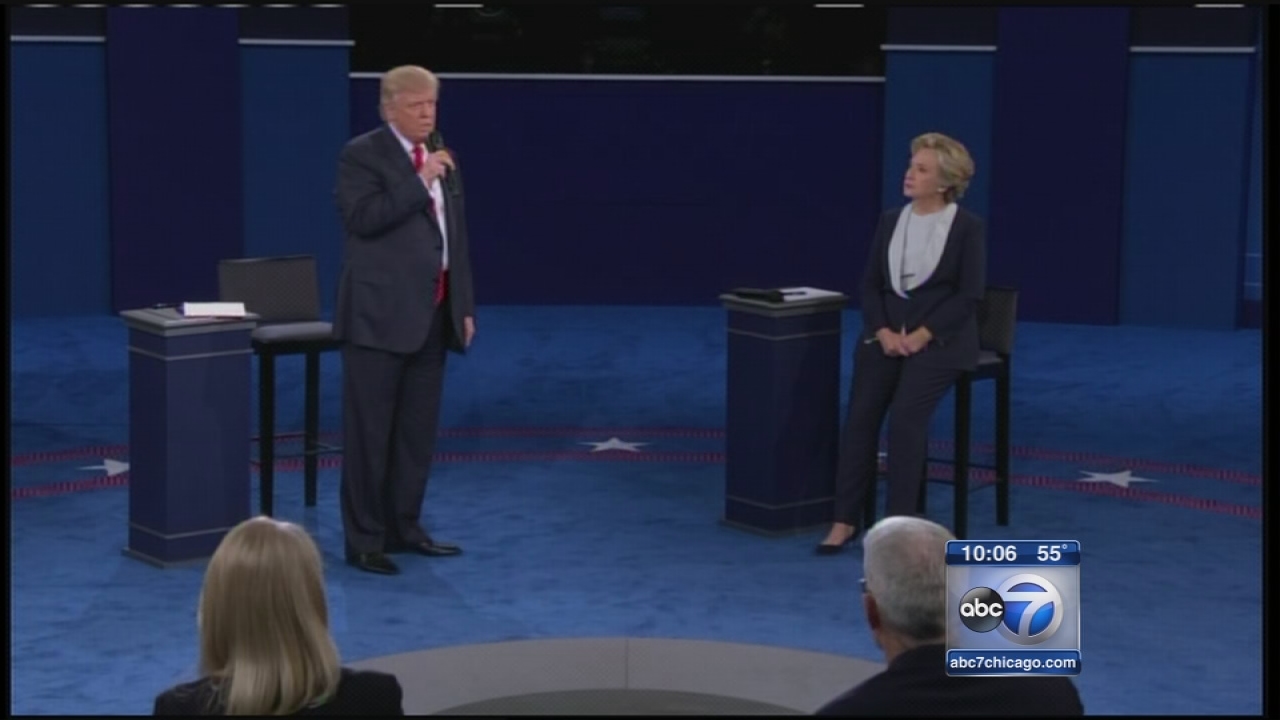 In answers to questions from the in-studio panel and on-line viewers Trump vowed his election would mean legal trouble for the former secretary of state whom he said destroyed e-mails from her private server.

"If I win, I am going to instruct my attorney general to get a special prosecutor to look into your situation," Trump said.

"It's just awfully good that someone with the temperament of Donald Trump is not in charge of the law of our country," Clinton said.

"Because you'd be in jail," Trump said.

"For you to say that there was nothing wrong with you deleting 39,000 e-mails, you should be ashamed of yourself," Trump said.

"I know you're into big diversion tonight. Anything to avoid talking about your campaign and the way it's exploding and the way Republicans are leaving you," Clinton said."

And the political novice questioned Clinton's record. He called it "a lot of words" but not much in terms of action.

Trump compared what he said about women in 2005 to what Former President Bill Clinton did in the White House in the 1990s.

The political firestorm was sparked by a 2005 video obtained and released Friday by The Washington Post and NBC News. In the video, Trump, who was married to his current wife at the time, is heard describing attempts to have sex with a married woman. He also brags about women letting him kiss them and grab their genitals because he is famous.

Donald Trump looks on as Juanita Broaddrick, who has accused former President Bill Clinton of sexual assault, speaks before the second debate.

Before the second presidential debate, Donald Trump has appeared at an event with women who accused former President Bill Clinton of rape and unwanted sexual advances.

The Republican nominee did not take questions as he appeared with Paula Jones, Juanita Broaddrick and Kathleen Willey.

Jones is a former Arkansas state worker who filed a sexual harassment lawsuit against Bill Clinton in 1994 for allegedly exposing himself to her in a Little Rock hotel room.

Also at the event was Kathy Shelton, who was a raped as a 12-year-old. Hillary Clinton represented the suspect as a public defender.

The debate was a town hall format at Washington University in St. Louis.

"There's definitely a buzz on campus and I'm just beyond excited that I was offered the opportunity to be inside the debate hall tonight," Malvika Ragavendran, from Naperville, Ill., said.

Ragavendran helped seat the live audience Sunday night and like so many Washington University students was anxious to hear Trump explain his controversial words.

"He's normalizing, he's rationalizing sexual assault which especially being on a college campus is such a big issue," Kristine Xu, from Naperville, said.

And some male Chicago-area students would not give Trump a pass.

"I have never, ever heard someone seriously talk about women in the way in that clip Trump does," Corey Meehan, from Lincolnshire, Ill., said.

"The culture is changing and its definitely not something that's taken lightly at all, Kevin Goon, from Lake Forest, Ill., said.

Trump supporters ABC 7 talked to blamed the media and the Clinton campaign for the recordings' release a few days before the debate.

"Men say those things all the time. You should hear the things that women say, too. It's not a big deal," Julie Melvin, a Trump supporter, said.

"Is that the sole issue that the American electorate should be focusing on?" Steve Walk, a Trump supporter said.

But Washington University professor Wayne Fields predicts the issue will be a focus Sunday and only Trump will be on the hot seat.

"He can't simply vilify the opposition or the moderator because some of the questions at least will be coming from the audience," Fields said.

Hours before a critical presidential debate, a damaged but defiant Donald Trump seized on never-proved sexual allegations against Hillary Clinton's husband as a growing group of Republican leaders called on the New York businessman to abandon his troubled presidential bid.

The Republican presidential nominee tweeted a link Sunday to an interview with a woman who Trump says "relives brutal rapes." Juanita Broaddrick's lawsuit against Bill Clinton accusing him of rape was dismissed in 2001 and criminal charges were never filed. Clinton has denied the allegations.

The tweet was backed by statements from a top Trump surrogate, former New York Mayor Rudy Giuliani. He equated sexually aggressive language from Trump caught on a newly surfaced recording to the actions of Hillary Clinton in the 1990s when Bill Clinton struggled through the fallout of his own sexual transgressions.

Over the objections of CNN anchor Jake Tapper, Giuliani insisted that Hillary Clinton "was the leader of the attack" against "the women who Bill Clinton sexually assaulted, sexually abused."

Giuliani, as Trump had the day before, declared that the Republican nominee would never quit the presidential race despite calls for him to step aside after his vulgar descriptions of sexual advances on women were revealed in a recording.

With just a month remaining before the election, Trump's task in Sunday night's debate is enormous, and perhaps insurmountable. Even before the recording of his remarks were made public, the businessman was lagging behind Clinton after an undisciplined first debate and struggling to overcome deep skepticism among women about his temperament and qualifications to be commander in chief.

Ohio Republican Party Chairman Matt Borges said that for Trump, "The debate is now everything."

Trump has long hinted he may turn the debate into a referendum on Clinton's marriage. In what was billed as a videotaped apology for his actions, Trump over the weekend said "Bill Clinton has actually abused women" and Hillary Clinton "bullied, attacked, shamed and intimidated" her husband's "victims."

On Sunday morning, Giuliani said Trump was counting on voters to forgive.

"He's going to apologize for what he did. He is going to explain to people that is not the man he is today. And he's going to count on the fact that the American people are fair and decent people, and when someone asks for forgiveness, they usually give it," Giuliani said on CNN's "State of the Union."

Outside Trump's small cadre of advisers, support for the businessman was scarce following Friday's release of the 2005 videotape in which he can be heard detailing his attempts to have sex with a married woman. In an extraordinary rebuke, Trump's own running mate, Indiana Gov. Mike Pence, declared he could neither condone nor defend the remarks.

"We pray for his family," Pence said.

Several other Republicans did take the extraordinary step of revoking support for their party's nominee one month from Election Day and with early voting already underway in some key states. Among them: Ohio Sen. Rob Portman, New Hampshire Sen. Kelly Ayotte - both are running for re-election - and the party's 2008 nominee, Arizona Sen. John McCain, who said Trump's behavior made it "impossible to continue to offer even conditional support for his candidacy."

Many went further and called on Trump to quit the race altogether.

Republican leaders have scheduled a rare Monday morning conference call for House GOP lawmakers, who are out of town for Congress' election recess. The email obtained by The Associated Press doesn't specify the topic for the call, but rank-and-file lawmakers believe it's about Trump.