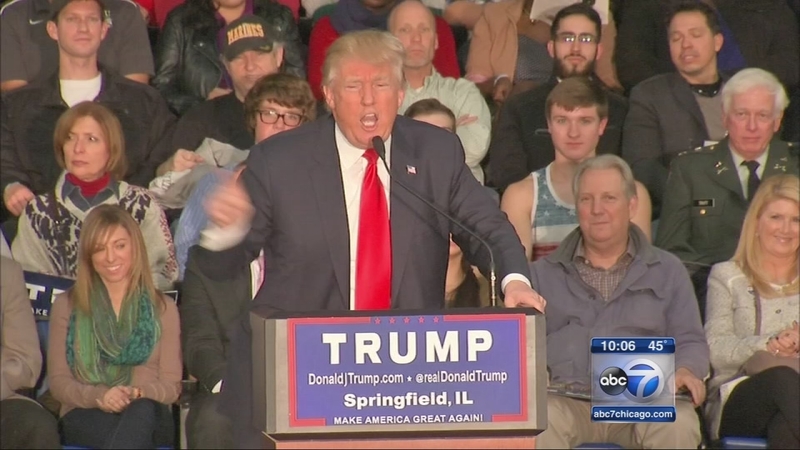 The Republican presidential candidate took aim at his usual targets on Monday night in an hour-long, ad-libbed, insult-laden rally. In other words, it was exactly what Trump supporters have come to expect. Target No. 1 was Hillary Clinton.

"Hillary is running for a lot of reasons. One of them is because she wants to stay out of jail," Trump said.

Target No. 2 was Ben Carson. He's given Trump a run for his money lately, but has come under fire for embellishing parts of his biography.

"This is a very strange election isn't it? You stab somebody and the newspapers say you didn't do it and you say yes I did. No you didn't. Yes I did," Trump said.

On immigration, Trump's not changing the tone of his tough talk.

"With us people stay and never leave. It's because we have stupid and incompetent people running our policy," Trump said.

While Trump drew a capacity crowd in Springfield, about 50 people came to see Ohio Governor John Kasich talk policy at the Billy Goat on Monday. The moderate Republican is polling in the single digits and is one of the several more traditional candidates who can't climb out of Trump's shadow.

Trump, the man who famously fired former Illinois Governor Rod Blagojevich, came to the capital short on specifics, but big on hype.

"He speaks his mind which most candidates don't. He's not a robot up there," said Eric Schurtz, of Arlington Heights.

"He says everything we've been thinking. For so long, we've been waiting for an unapologetic American to say what we think and what we feel," said Antonio Liga, of Des Plaines.

Trump is coming off a weekend appearance on Saturday Night Live that scored in the ratings, but critics felt was a bit lackluster in terms of laughs.