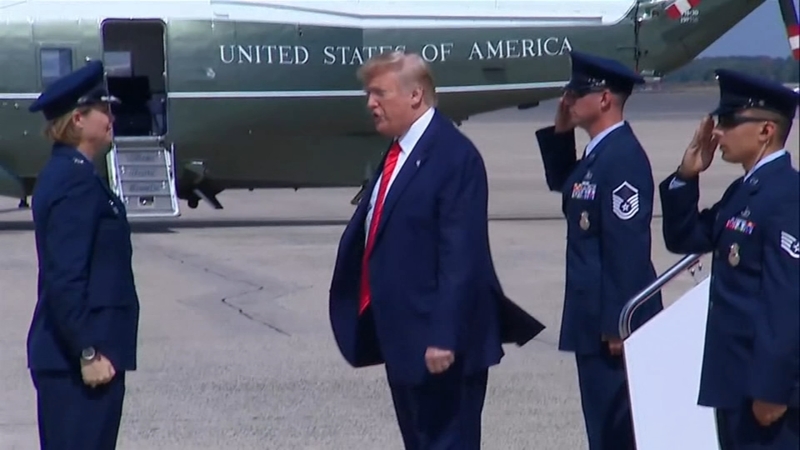 CHICAGO (WLS) -- Even though Congress is on a two-week hiatus, on Monday there were fast-paced developments in the impeachment move on President Donald Trump.

The House Intelligence Committee began moving on some of the president's men.

The I-Team has learned some members of the House Intelligence Committee are concerned that the president's own comments may be endangering the whistleblower at the center of it.

"I don't like the way that the president has been talking about the whistleblower," said U.S. Rep. Raja Krishnamoorthi, a northwest suburban Democrat who is a member of the Intelligence Committee.

Krishnamoorthi, the 8th District Illinois congressman, told the I-Team Monday that his committee has now made arrangements with the White House whistleblower to testify in a closed session. He wants the appearance on Capitol Hill as quickly as possible he says because of security concerns. That concern follows President Trump's insinuated threat the whistleblower and those who helped him maybe should be executed.

Among the president's dozens of tweets and statement about the whistleblower was this, "The spies and treason, we used to handle it a little differently than we do now."

"He said we used to treat them in another way, in an appropriate way in the past, which to me signals something to me about harming these people" said Krishnamoorthi. "That's not the way we should be talking about whistleblowers. Whistleblowers are people the American public want to bring forward misconduct as they see it."

In a letter from the whistleblower's attorney he writes of "serious concerns we have regarding our client's personal safety" alleging "certain individuals" are offering a $50,000 bounty for the whistleblower's identity, and cites the president's own comments.

Among those convers is a retweet by President Trump of an evangelical pastor warning about the possibility of a civil war if Trump is removed from office.

And Illinois' senior senator Dick Durbin also weighed in on the statement.

"This suggestion this morning that if something should happen to impeach him it would lead to a civil war in the United States. These are outrageous and disgusting comments" Sen. Durbin said on Monday. "No leader of the United States should ever be making these comments."