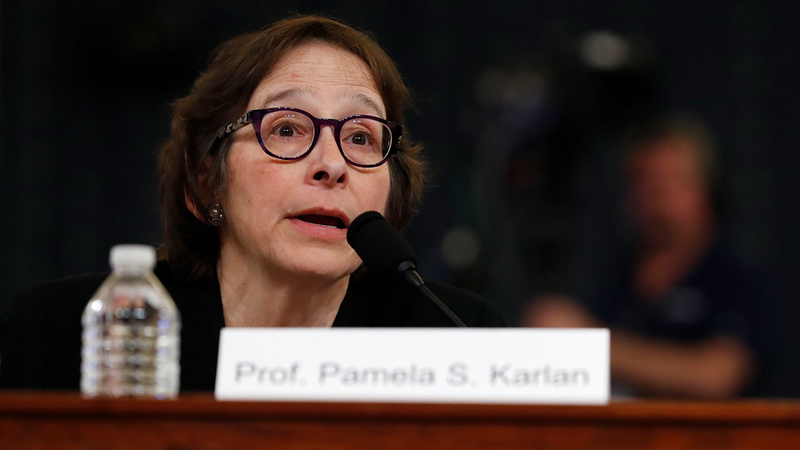 "If I can say one thing, I want to apologize for what I said earlier about the president's son. It was wrong of me to do that," Karlan said.

She then added, "I wish the president would apologize for the things he's said wrong, but I do regret having said that."

Republicans criticized Karlan-- who was one of four legal scholars brought in to make the case for or against impeachment-- for a remark she made about President Trump's 13-year-old son, Barron.

"While the president can name his son 'Barron' he can't make him a baron," Karlan quipped during her testimony.

Republican congressman Matt Gaetz quickly launched into a contentious back and forth with Karlan over the comments.

"A minor child deserves privacy and should be kept out of politics. Pamela Karlan, you should be ashamed of your very angry and obviously biased public pandering, and using a child to do it," Mrs. Trump said.

Among Democrats watching the testimony, Karlan was applauded for her fiery style and wit. She went viral when she defended her knowledge of the impeachment inquiry after Republican congressman Doug Collins suggested she didn't do the reading.

"Mr. Collins I would like to say to you sir that I read transcripts of every one of the witnesses who appeared in the live hearing, because I would not speak about these things without reviewing the facts," Karlan said. "So I'm insulted by the suggestion that as a law professor I don't care about those facts."

She also joked that she spent all of her Thanksgiving reading the testimony-- even "eating a turkey that came to us in the mail that was already cooked because I was spending my time doing this."

Karlan is well-known for her commitment to progressive causes. She is the co-director of Stanford's supreme court litigation clinic. She has worked on big cases, including the same-sex marriage case Obergefell v. Hodges. And she's also argued nine cases before the supreme court.

"She's a brilliant scholar of constitutional law and the law of democracy and a longtime very successful, very popular law professor," Stanford professor of Law David Sklansky, who has worked with Karlan for three-decades, told ABC7 News.