President Trump on violent crime in US: 'What the hell is going on in Chicago?' 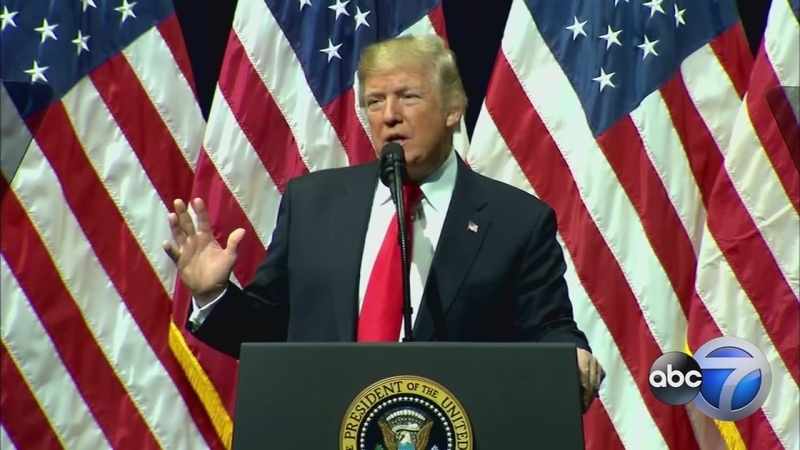 QUANTICO, Va. (WLS) -- While discussing violent crime in America at the FBI National Academy Friday morning, President Trump asked, "What the hell is going on in Chicago?"

"In the last two years, America has seen a tragic rise in violent crime. In 2015 and 2016, we witnessed the steepest two-year consecutive increase in murders in nearly half a century," Trump said, before adding, "And you look at what's going on... Chicago, what the hell is going on in Chicago? What the hell is happening there?"

After brief applause, the president continued, "For the second year in a row, a person was shot in Chicago every three hours."

There were 4,331 shooting victims in Chicago last year, according to the Chicago Police Department. That makes for an average of roughly 11.9 shooting victims per day. That means on average, a person was shot approximately every two hours in 2016. The president's estimate was slightly low.

Trump then returned focus to the law enforcement officials in the audience.

"You don't think these people in this room can stop that? They'd stop that. They'd stop it.... Police departments are overstretched, they're underfunded, and they're totally under appreciated, except by me," he said.

ABC 7 Eyewitness News will have more on this story later on Friday.

President Donald Trump laced into FBI leadership Friday, while proclaiming his loyalty and support for law enforcement in an address at the agency's training academy.

"It's a shame what's happened" with the FBI, the president said as he left the White House for a speech at the FBI training academy in Quantico, Virginia. He called the agency's handling of Hillary Clinton's email investigation "really disgraceful" and told reporters "we're going to rebuild the FBI."

Shortly afterward, Trump lavished praise on graduates of a weeks-long FBI National Academy program and their families, touting their accomplishments and pledging his unwavering support. Trump told law enforcement leaders he is "more loyal than anyone else could be" to police.

"Anti-police sentiment is wrong and it's dangerous," he added. "Anyone who kills a police officer should get the death penalty."

He also celebrated his decision to make it easier for local police forces to purchase surplus military equipment, and questioned rising violence in Chicago.

"There is extreme bias against this president with high-up members of the team there at the FBI who were investigating Hillary Clinton at the time," Gidley charged, as special counsel Robert Mueller pushes on with a probe of possible Trump campaign ties to Russia. Gidley says Trump maintains confidence in the FBI's rank-and-file.

Edits to the Comey draft appeared to soften the gravity of the bureau's finding in its 2016 investigation of Hillary Clinton's use of a private email server while secretary of state.

"It is very sad when you look at those documents, how they've done that is really, really disgraceful, and you have a lot of really angry people who are seeing it," Trump said of the document.

Gidley said the disclosure of politically charged text messages sent by one of the agents on the Clinton case, Peter Strzok, were "eye-opening." Strzok, who was in the room as Clinton was interviewed, was later assigned to special counsel Robert Mueller's team to investigate potential coordination between Russia and the Trump campaign. He was re-assigned after the messages were uncovered this summer.