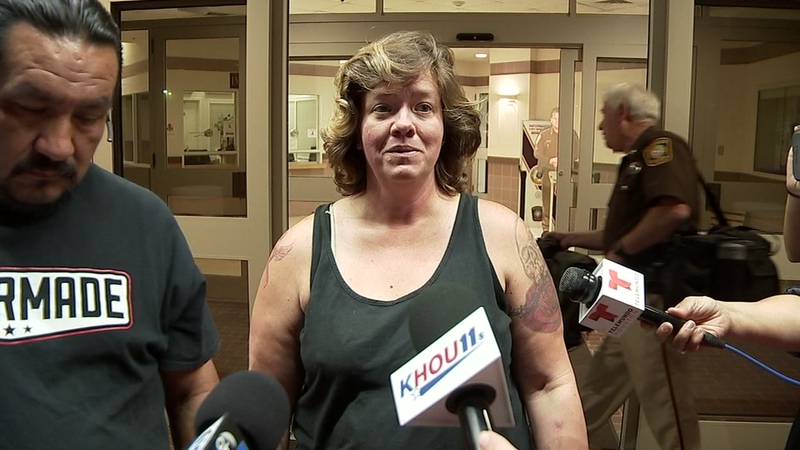 RICHMOND, Texas -- The owner of the pickup with a "F (expletive) Trump and f (expletive) you for voting for him" sticker has been released from jail.

Karen Fonseca was arrested for an outstanding warrant from August. Records show she was accused of fraud. A spokeswoman for the Fort Bend County Sheriff's says they received a tip about the warrant. Fonseca's husband, Mike Fonseca, says she was arrested at their home in Stafford in front of her 6-year-old daughter and he questions the timing.

"I think it's the sticker," Mike Fonseca said outside the Fort Bend County Jail.

Fonseca told Eyewitness News that she thinks Sheriff Troy Nehls had something to do with her arrest.

Sheriff Nehls said, "The Facebook post accomplished its objective and now we know who owns the truck."

ABC13 first tracked down the driver of the pickup truck. Fonseca said she put the custom-made graphic up about 11 months ago. She said her family is expressing their First Amendment rights and voicing their dissatisfaction with President Donald Trump. Fonseca said she's surprised Sheriff Nehls couldn't reach her. She's open to sitting down with him.

She said people tell her they "wish they had the guts" to put up a similar sign on their vehicle.

"No Sheriff Nehls, you can't prosecute speech just because it contains words you don't like," ACLU said.

Thursday morning, Fort Bend County District Attorney John Healey told Eyewitness News, while he is personally offended by the use of profanity in public, just having the sticker, does not rise to the level of a crime.

"No, I would not take the case," Healey said.

Fonseca's bond is set at $1,500 and she was released late Thursday night.

"People abuse the badge, in my opinion, and money talks," Fonseca said.