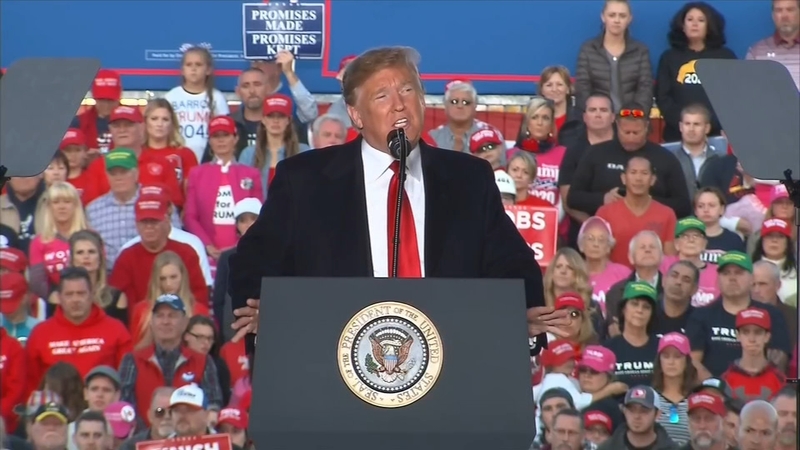 President Donald Trump held a campaign rally in southern Illinois on Saturday, just ahead of the midterm elections next week.

Trump took the stage at about 5:20 p.m. at the Southern Illinois Airport at 605 Flightline Road in Murphysboro, located about five hours south of Chicago.

Trump had considered canceling the rally because of the Pittsburgh synagogue attack in which 11 people were killed.

But in remarks to young farmers in Indiana earlier in the day, Trump said "we can't let evil change our life and change our schedule." He said he'd go with a "heavy heart."

Congressman Mike Bost, who's in a tight re-election race against Democrat Brendan Kelly in southern Illinois, took the stage with Trump, along with Congressman Randy Hultgren from Chicago's western suburbs and Congressman Rodney Davis from central Illinois.

Illinois Gov. Bruce Rauner, who rode his motorcycle to the event, but kept a low profile, only meeting with the president in private and then leaving before the rally.

"This is the time to renew the bonds of love and loyalty that holds us all together as Americans," Trump said. "These bonds have always sustained our nations in its hour of need."

Earlier, the president called the attack at a baby naming ceremony on Saturday morning a "wicked act of mass murder" that "is pure evil, hard to believe and frankly something that is unimaginable."

Trump's stop in Murphysboro followed a stop in Indianapolis for an agriculture convention and mark another of many campaign stops for the President as he seeks to boost Republicans with just days remaining until the midterm elections.

Trump addressed the shooting in tweets as developments unfolded Saturday morning. After word came in from Pittsburgh that there were multiple fatalities in the shooting and that the gunman had surrendered to police, Trump said he had told local and state leaders that his administration would be there to support them.

In comments to reporters before boarding Air Force One en route to Indiana, Trump said, "It's a terrible, terrible thing what's going on with hate in our country, frankly, and all over the world."

Asked if in the wake of yet another high profile mass shooting he would consider changing gun laws, Trump said the synagogue should have had armed protection.

"It's too soon," Trump said. "This is a case where if they had an armed guard inside, they might have been able to stop him immediately."

He said further that the U.S. should "stiffen up our laws in terms of the death penalty."

The shooting followed a week that saw bombs sent to former President Barack Obama, former Secretary of State Hillary Clinton, CNN and others.

On Friday morning, Trump referred in quotes to the bombs and lashed out against the media for what he said was false attribution of the bombs to his own rhetoric. After the arrest of the suspect, Cesar Sayoc, in Florida, Trump said the "terrorizing acts" had no place in the U.S.

"We must never allow political violence to take root in America," he said. "I'm committed to doing everything in my power as President to stop it."

Trump went on to hold a rally in Charlotte, North Carolina, on Friday evening, and at the event, he continued to attack the media coverage of the bombs.

A law enforcement official said Sayoc was living in a van covered in stickers expressing support for Trump along with one that said "CNN sucks" and others featuring targets or crosshairs on prominent Democrats and figures critical of Trump.

This is Trump's third rally in Illinois and the first rally in the Murphysboro area since he started his presidential race in June 2015.