Where is Adam Schiff? Doug Collins blasts CA congressman for no-show, claims he 'can't back up his own report' 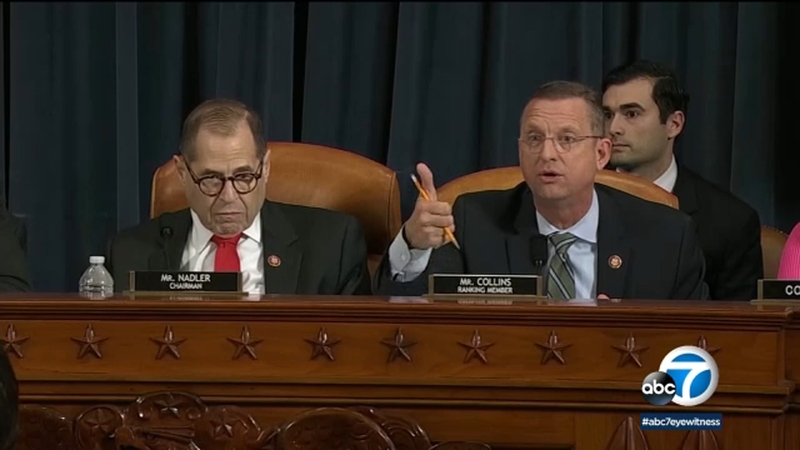 Republicans on the attack in tense impeachment hearings

Collins, R-Ga., the top Republican on the Judiciary Committee, said Democrats are racing to jam impeachment through on a "clock and a calendar" ahead of the 2020 presidential election.

"They can't get over the fact that Donald Trump is the president of the United States and they don't have a candidate that can beat him," Collins said.

"You know how I know this is also a problematic experience? Just look over the past three weeks, when the chairman of the Intelligence Committee - who by the way is absent today, guess he can't back up his own report - but he started his own hearing by making up the factual call," Collins said, referring to the July 25 phone call in which Democrats say Trump abused his power by asking Ukrainian President Volodymyr Zelenskiy for a favor in investigating Democrats.

That was bribery, they say, since Trump was withholding nearly $400 million in military aide that Ukraine depended on to counter Russian aggression.

"Adam Schiff, when he told us he wasn't gonna come, instead hiding behind his staff, he also told us that we're gonna keep investigating because they know this is going nowhere in the Senate and they're desperate to have an impeachment vote on this president," he said.

The hearings set off a pivotal week as Democrats march toward a full House vote expected by Christmas. In drafting the articles of impeachment, Speaker Nancy Pelosi is facing a legal and political challenge of balancing the views of her majority while hitting the Constitution's bar of "treason, bribery or other high crimes and misdemeanors."

Ahead of Monday's hearings, Schiff said, "I think we should focus on those issues that provide the greatest threat to the country. And the president is engaged in a course of conduct that threatens the integrity of the next election, threatens our national security."

A vote to convict requires a two-thirds vote of the Senate, where Republicans hold 53 of 100 seats. It is unlikely that Republican senators would cross party lines and vote to remove Trump from office.