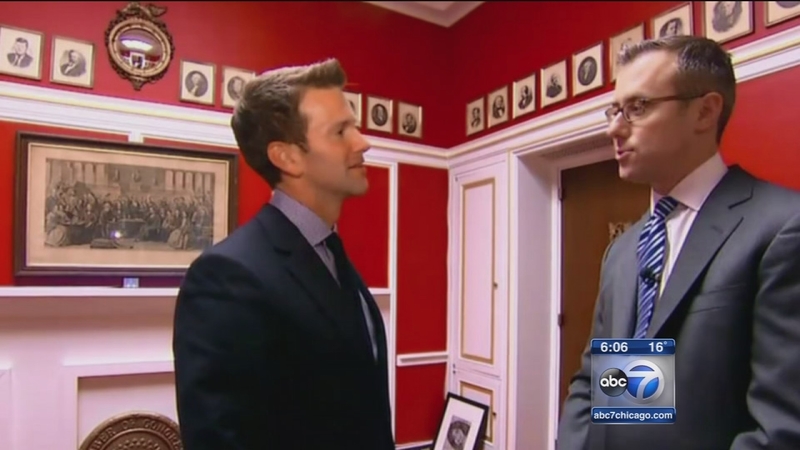 WASHINGTON, D.C. (WLS) -- The ABC7 I-Team has Illinois congressman Aaron Schock responding to calls for an ethics investigation after his office was redecorated and ended up resembling the "Downton Abbey" TV show.

Rep. Aaron Schock, R-Peoria, says he's never been an "old crusty white guy" - and those are his exact words. The 33-year-old congressman from Peoria claims he's never seen Downton Abbey on TV and that he didn't realize his Capitol Hill offices actually looked like something fit for a royal highness.

The story of his lavish office makeover has simmered since Tuesday, when the I-Team showed you the pictures taken by a Washington Post reporter. Now, for the first time, Schock is talking.

ABC News reporter asks: "What shade of red do you think this is?"
Schock: "I don't know. It's bright."

An ABC crew had waited for Schock on Capitol Hill because he wouldn't respond to messages, questions or calls about the fancy red re-do of his congressional quarters by an interior designer from downstate Illinois.

ABC: "So someone in your office said that it was inspired after Downton Abbey, is that right?"
Schock: "Uh, I learned that when I read it in the newspaper myself, so..."

Even though the office space looks like the interiors of this Downton Abbey castle, where the Earl of Grantham might stroll through at any minute, the real question is whether Schock has violated house ethics rules by accepting free work, and paid for the furnishings with campaign funds - both of which a DC watchdog wants the house to investigate.

ABC: "What about this decorator though? She's from your district. Are you going to pay for this? Is this in-kind purchase free service?"
Schock: "No. She is the person who decorated my office four years ago in the Canon building. And I wrote her a personal check for her services."
ABC: "For how much?"
Schock: "Want to say that it was maybe $6,000. But it was four years ago, but around that. And so, you know, the same thing will happen now. She's working on the office, so once it's done, I'm sure I will get an invoice as I did before and we'll pay."
ABC: "What do people back home in Peoria think of this?"
Schock: "Well, I've never been an old crusty white guy and..."
ABC: "What does that mean?"
Schock: "When I ran for office, well... I'm different. I came to Congress at 27. I'm not going to, when I go take a personal vacation, I don't sit on the beach, I go do active things. And so, I'm also not going to live in a cave. So when I post an Instagram photo with me with my friends, as Taylor Swift said, 'Haters are gonna hate.'"

Whether the decor is Downton Abbey or early Peoria, Congressman Schock says he will be writing a check to the interior designer who did the work. And Wednesday night, he said that he has received no calls from angry constituents - but only supporters who have told him to hang in there.