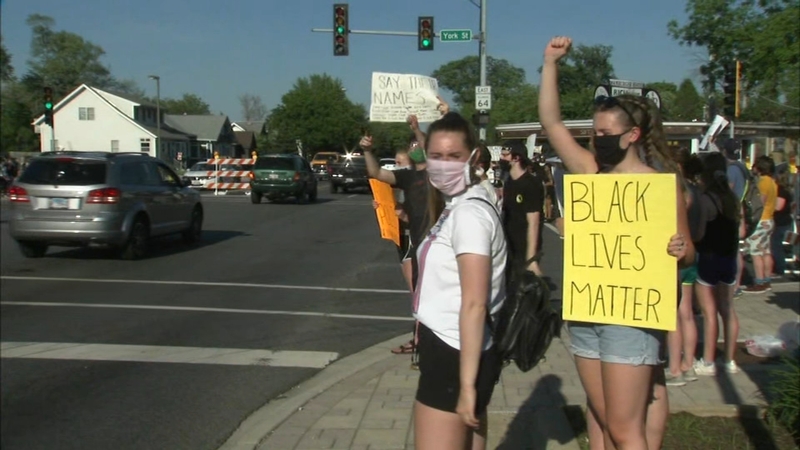 NAPERVILLE, Ill. (WLS) -- Dozens of businesses were damaged by looters and vandals in downtown Naperville and Tuesday morning, residents got together to begin cleaning up.

What started out as a pre-planned peaceful protest of about 300 people near Washington and Chicago Avenue turned violent Monday night. Police said some members of the group began to separate, vandalizing several businesses. Some could be seen using a skateboard to break windows and video of the Pandora Jewelry store shows looters clearing it out.

Families, friends and neighbors descended on downtown Naperville to hale clean up after a night of looting and vandalism.

"What I like to talk about is what did we prevent? What didn't happen here?" said Naperville Police Chief Robert Marshall. "None of these businesses have been burned down, none of the police cars were overturned and set on fire. There were no citizens injuries, there was no gun violence so I'm very proud of our Naperville police department how we responded."

Police said some threw bricks and bottles and even set off an explosive device which injured three officers who are expected to be OK.

One person remains hospitalized with serious injuries after being stabbed by another protester, according to police.

A second person suffered a broken leg and several officers were injured after an explosive device was thrown at them, officials said.

"I've been asked why didn't you just arrest 300 to 400 people? Tactically, that was impossible. There were people still peacefully protesting down there, and to separate the violence from the peaceful protesters was just not tactically possible," Marshall said. "We don't deploy blanket tactics like tear gas when only some individuals are becoming violent and committing criminal acts."

A SWAT team was called in and by 1 a.m. the downtown area was secured, but a trail of damage was left behind.

At daybreak, families, friends and neighbors descended on downtown Naperville with brooms and buckets in hand.

"When I saw this on TV yesterday, it took me back to what I ran away from, from my country so I never thought my kids would have to see this," said Naperville resident Tina Jagshi.

Jeremiah Mallie was one of the demonstrators who saw what was happening and came back overnight by himself to clean up.

"I feel like everybody should try to keep it peaceful no matter what," he said.

"It was devastating for the community, devastating for downtown," said Naperville City Manager Doug Krieger. "Naperville is a fabulous community and if you look around this morning, you'll see that we're gonna rise up better than we were before."

"It's heartbreaking, but it's heartbreaking on so many different levels so the thing that's gonna come most of this is our community coming together," said Kaylin Risvold, Naperville Chamber of Commerce president and CEO.

At least 30 downtown businesses were vandalized.

11 people ranging from 18 to 31 years old were arrested for crimes including burglary and possession of stolen items.

Police said they expect to make more arrests as the investigation continues.

They say they have video of people looting and committing acts of violence and they will investigate.