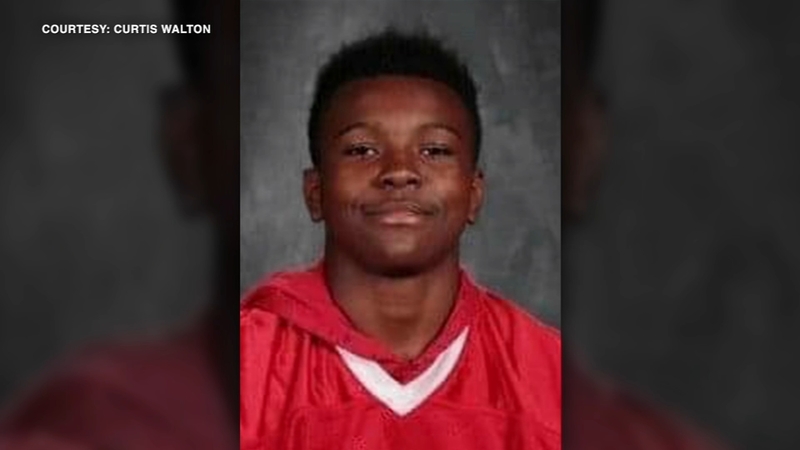 UNINCORPORATED GARY, Ind. (WLS) -- A northwest Indiana high school football team took the field Friday night in honor of a freshman player just days after he died after being found unresponsive at the bottom of the school's pool.

Curtis Walton Jr., 14, was pulled from the pool at Calumet New Tech High School in unincorporated Gary by his fellow classmates on Wednesday. He was taken to a nearby hospital, where he died the next morning.

"It's an experience I wouldn't wish on any parent," said Curtis Walton, the teen's father. "But I'm also thankful, first of all to God that He allowed us to parent him."

Walton's teammates are remembering him as part of the Friday night varsity game, which would have been the teen's fourth in a Warriors uniform. Walton's sisters wore his jersey to school on Friday, and the two young men who pulled him from the pool wore some of his medals.

"He was the energy. He was definitely a kid you could count on to bring the morale of the team up whenever you needed it," said Warriors coach Rick Good.

The teen's mother, Tina Walton, said many students and parents are reaching out with stories about their son after his death.

"It's been good, but emotional at the same time," Tina Walton said.

"It's an experience I wouldn't wish on any parent," the boy's father added.

The school's superintendent said that a coach was watching over the pool when Walton drowned. Trainers immediately began CPR and administered the Automatic Electronic Defibrillator, according to Supt. Sharon Johnson-Shirley.

"We had people on guard," Johnson-Shirley said. "The coach as a matter of fact was in the seat to look over the students and he saw two other students going down to bring this kid up."