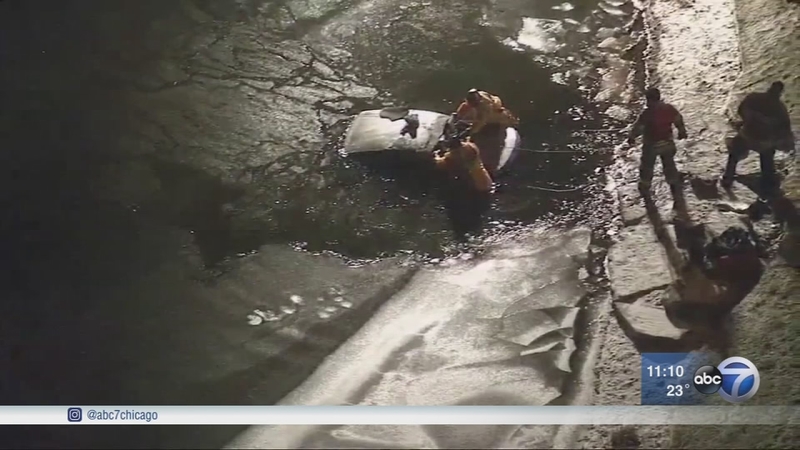 Woman charged with DUI after driving into Elgin pond

ELGIN, Ill. (WLS) -- A 19-year-old woman was charged with driving under the influence after her car ended up in a retention pond in northwest suburban Elgin early Thursday morning.

Jennifer Shallow lives across the street from the scene, near South Randall Road and College Green Drive.

"The dogs started barking, probably around 6 o'clock, and I saw lights. The whole subdivision was blocked off with ambulances," Shallow said.

Chopper 7HD captured video of the crash. The driver, Hollyann Pilcher, lost control of the Volkswagen she was driving, struck a light pole and careened into the pond. At the time of the crash, roads were slick and lightly covered with snow.

Pilcher managed to get out of the car on her own and started knocking on residents' doors, asking for help, police said. Neighbors said she told them there was someone else in the car.

Police were called to the scene around 5:30 a.m. A dive team was deployed to search for the passenger.

"Initially, I think she reported that there was a second person in the car with her that was submerged in water. We called out the fire department. We had the car towed from the pond and we didn't locate anyone," Young said.

Authorities later said that passenger somehow got out and made his way to a friend's house nearby. It's unclear why he left the scene.

Pilcher was treated for hypothermia, but did not have to go to the hospital.

She was later arrested and charged with DUI. Police said her blood alcohol content was three times the legal limit.

"I mean, it worries me. I think that that's always - you put yourself and others in danger - you know? I hope that's not the case, but if it is, I hope that she can get some help and it doesn't happen again," Shallow said.
Report a correction or typo
Related topics:
elginduiwater rescuewater searchdui crash
Copyright © 2022 WLS-TV. All Rights Reserved.
TOP STORIES
ISP trooper, wife ID'd after found dead inside parked car: police
3 hurt in suburban sports bar shooting: Rolling Meadows police
Cause of death revealed for 23-year-old woman found dead after date
Family continues to seek new leads in unsolved Naperville murder
US Rep. Marie Newman may have broken law: ethics office
WI Republicans to vote on tougher penalties for protesters
Cold snap moves into Chicago area | warming centers available
Show More
Dad charged and fired from job after racist tirade posted on TikTok
FDA halts use of antibody drugs that don't work vs. omicron
Woman, 81, dies after Stony Island Park house fire, CPD and CFD say
Indiana Dunes National Park to charge entry fee
Chicago Weather: Bitterly cold Tuesday
More TOP STORIES News