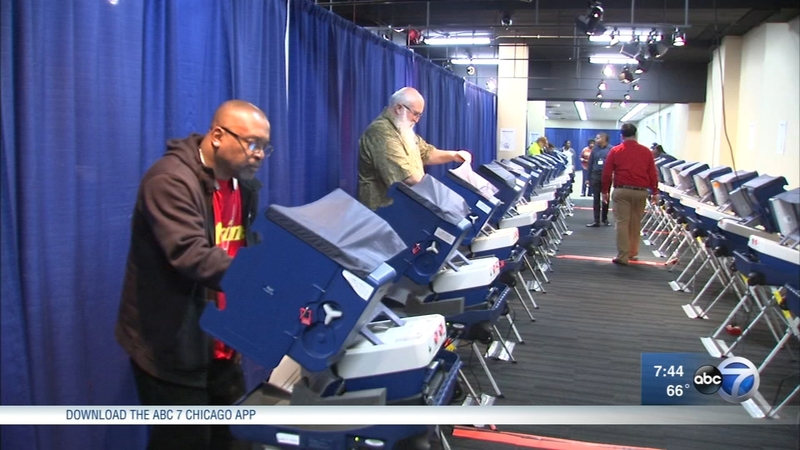 CHICAGO (WLS) -- The midterm elections are just a few weeks away and voters are already hitting the polls.

Five early voting locations opened Thursday and will be there through Election Day with some voters hoping for a wave of change.

Already, there's a lot of energy.

"We've already detected a lot of interest in this election," said Chicago Board of Elections James Allen. "We are well over 50,000 applications to vote by mail, and to put that in perspective, for the presidential election in 2016, we only had about 18,000 applications at this point."

As the first votes for the 2018 election are cast, one of the major contenders, democratic candidate for governor JB Pritzker arrived with a marching group of supporters, casting his ballot at the super site location on West Washington Street in the Loop. It's something most politicians save for a boost on Election Day, but, "Every day is Election Day in Illinois and all across the state of Illinois," Pritzker said. "There's so much enthusiasm among the voters that people are actually going to vote earlier than usual, I think. And I'm pleased to be out here early to encourage everybody to do that."

Voters who cast their ballots were in and out in minutes hoping to energize their friends and family.

"This is one of the most important elections we have in our lifetime, and it's important that people come out and vote," said Chairman of the Cook County Young Democrats Ty Cratic.

"Go out early, show other people it's important, get everybody inspired to vote," said early voter Betsy Schaack. "This way nobody has an excuse for not voting."

"Vote early if you have time. Don't wait 'till the last minute because you may not be able to vote on the last day," added early voter Elaine Ingram.

Thursday's early voting is limited in terms of locations, but will expand on October 22 as the election draws closer.

For now, there is one voting location available for the city, another for Cook County, and then one apiece for Kane, DuPage, and Will counties.