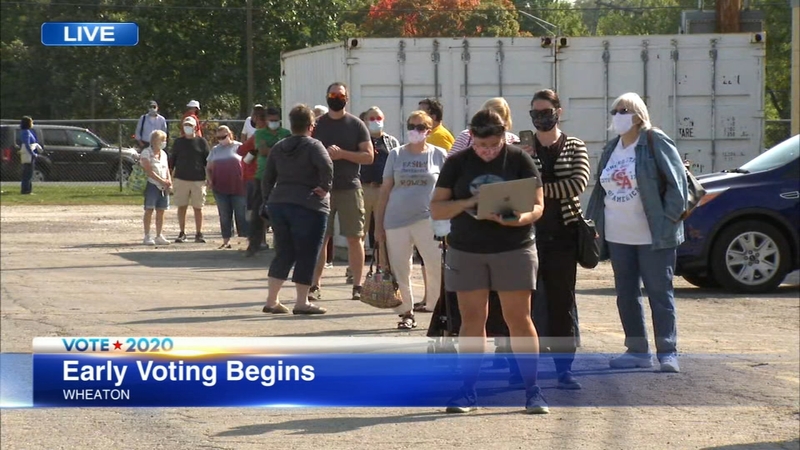 LAKE COUNTY, Ill. (WLS) -- Early voting got underway Thursday in parts of Illinois, including DuPage and Lake counties, where voters lined up before the polls even opened.

Residents looking to vote in-person can do that at the DuPage County Fairgrounds from 8 a.m. until 4:30 p.m. and officials are encouraging people to cast their ballots before Election Day.

"Oh my gosh, this is so vital, it is important to do it as soon as possible," said Carol Etherton, who was second in line to vote at the DuPage County Fairgrounds.

In Lake County, only one early voting site was open and voters lined up early in Waukegan.

"I would stand naked in a sea of coronavirus to vote today," said Mona Mustafa, Lake County early voter. "It's symbolic for me, I think it's the most important election in the history of our country."

There was a two hour socially distanced wait at the Lake County Courthouse, as COVID-19 protocols only allowed for three voting booths.

"What we heard from voters was they didn't think anyone would show up," said Todd Dovain, Lake County Clerk Chief Deputy. "Everybody showed up."

In DuPage County, residents began lining up more than an hour before the polls officially opened.

"I'm an engineer, I work from home," said Jim Schehr, the first voter in line. "I'm a busy person. This takes time to do, and certainly there will be a lot of people voting, not just today but on Election Day, so I wanted to get it out of the way."

Voter Barbara Kennedy said she was out voting early, "because i don't trust any other way to do it."

With the pandemic, and many rules to put in place, election officials had to bring in extra staff and start prepping weeks in advance.

"We had to increase the number of election judges and the booths and also the equipment everything we had to do more of," said DuPage County Clerk Jean Kaczmarek.

They even had to bring in a professional cleaning crew to keep the voting stations sanitized.

"We have a professional cleaning crew here they cleaned last night and will be coming in to clean during the day we want everyone to be reassured it's as safe and sanitary as possible," said DuPage County Chief Deputy County Clerk Adam Johnson.

In-person voting also opened in Kane, Will and McHenry counties.

In addition to opening early polling sites, election officials will begin mailing out over 1.7 million mail-in ballots that have been requested so far.
Because of the pandemic, many state officials are encouraging people to use vote by mail or vote early- and a reminder- you have several weeks to make your vote count.

"This is just day one, we have 40 days of voting, and we have different options of voting, vote by mail, apply online, regular early voting in 18 locations. This is just one option."

Voters in line Thursday said they prefer the traditional way of voting, even in a pandemic.

"I wanted to see my card go into the slot," said Mitch Wheeler, voting early in Lake County.

"There is nothing wrong with mail in voting, but I don't like it," said Steve Visk, Lake County early voting. "We have to go back to pulling the lever."

In Chicago, early voting kicks off October 1 at the city's Loop Supersite on Clark and Lake. The other wards open up on October 14.

There will also be drop boxes available at every early voting site to submit signed and sealed ballots.