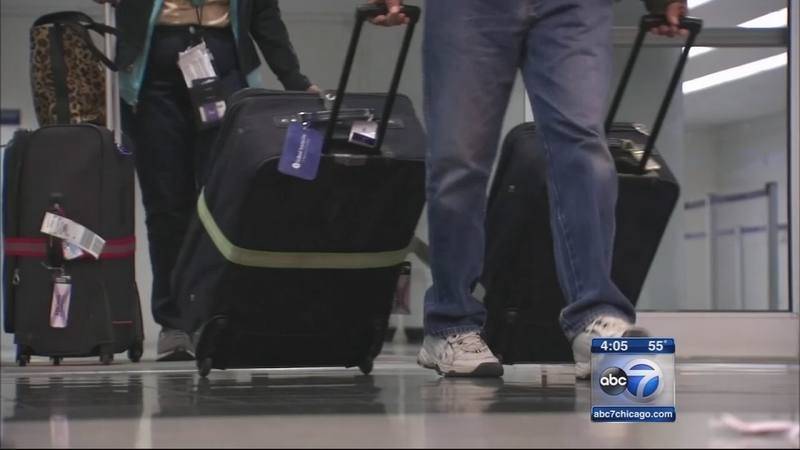 2 passengers from Liberia monitored in Chicago

CHICAGO (WLS) -- There's no Ebola in Chicago - that's the message coming from health officials as two patients, an adult and a child, recover from ailments that resulted in them being flagged at O'Hare Airport when they arrived on flights that originated in Liberia Tuesday.

The child, who is being tested for Ebola "out of abundance of caution" at University of Chicago, was said to have vomited on the plane. The adult presented with nausea and diarrhea and is recovering at Rush University Medical Center, though health officials say both patients' conditions are improving.

And while neither patient is believed to have been exposed to Ebola, both were hospitalized as a precautionary measure. It's all part of the government's decision to screen all passengers arriving at O'Hare airport from Western Africa.

"Chicago Department of Public Health stayed in communication with our hospital. We knew where the patient was on the freeway, when they were being loaded into an ambulance, when they were leaving O'Hare," said Dr. Omar Lateef, Rush University Medical Center. "Our team mobilized up here. We prepared the pod for our first patient while the emergency room and our infectious disease unit mobilized in the ER waiting for the patient."

The adult patient was treated Tuesday night in a temporary containment unit built specifically to deal with potential Ebola cases at Rush. Once the patient was deemed not to have Ebola, he was transferred out of isolation and the materials were disposed of. Several other rooms, including equipment areas and a staff room with a decontamination shower, are part of this special unit.

Dr. Lateef says that everything went according to protocol.

"It was the first time we were able to put into action something that we put together inside a week to prepare for an infection like that," Lateef said.

If admitted, all such patients - whether admitted to Rush, the University of Chicago or the other hospitals that are part of Chicago's Ebola Response Network - will be isolated from the rest of the hospital's patients.

"We will need to hold those individuals at our facility until the test can come back from the CDC, so it's the quarantine center where they will be staying," said Krista Curell, University of Chicago Medicine. "And then obviously if it does come back positive, the quarantine unit is where we will be providing the rest of their care."
Related topics:
hyde parkuniversity villageo'harehealthohare airportebola
Copyright © 2022 WLS-TV. All Rights Reserved.
RELATED
All travelers from Ebola-stricken nations to be monitored for 21 days
Officials: 2 patients monitored at Chicago hospitals for Ebola-like symptoms
TOP STORIES
Chicago area COVID testing company sued over alleged scheme
Car with kids inside stolen, crashed on Northwest Side, police say
Cook Co. judge has to do sensitivity training after 'sexist' comments
DuPage County votes to hold Ribfest 2022 in Wheaton
Man charged in murder of Gary businessman, community leader
By the numbers: Stats that tell story of Biden's first year
1 killed, 1 critically hurt in Sauganash crash: Chicago police
Show More
Bodycam videos shows U of C police shooting in Hyde Park
Recent bike shop thefts prompt Naperville store to board up
Voting bill collapses, Democrats unable to change filibuster
Chicago COVID: City past omicron peak, but not out of woods yet
How to avoid tax refund delays for your 2021 return
More TOP STORIES News