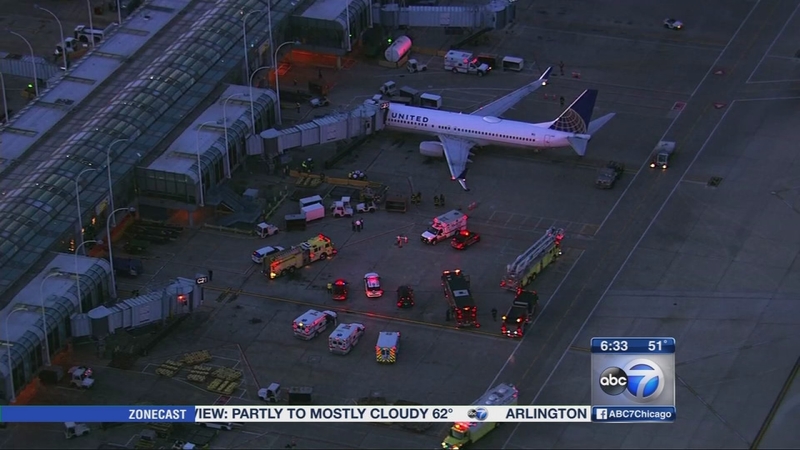 CHICAGO (WLS) -- A sick passenger on a United Airlines flight that landed at O'Hare Airport prompted a precautionary Level 1 Hazmat call in light of the Ebola outbreak. Fortunately, the officials confirmed the woman did not have the virus.

But Monday night shows efforts to contain Ebola mean increased vigilance at the airport, which could affect all passengers.

Flight 1543 arrived in Chicago around 6 p.m. Monday from New York's LaGuardia Airport. The Chicago Department of Aviation said the pilot called for medical assistance because a woman in her 70s was vomiting.

The Chicago Fire Department called a Level 1 Hazmat when the plane landed. The woman was checked out while the other passengers waited on the plane. When officials determined she did not have Ebola, since she was not experiencing fever or other symptoms of the virus, they gave the all clear.

The woman was then taken to Our Lady of the Resurrection Medical Center in good condition for further evaluation.

Meanwhile, the Centers for Disease Control and Prevention and President Barack Obama have been trying to ease fears about the spread of the deadly virus in America.

"We know how to stop outbreaks of Ebola. In this country, we have healthcare infection control and public health systems that are tried and true and stop before there is any widespread transmission," CDC Director Dr. Tom Frieden said.

A man suffering from Ebola-like symptoms arrived in Newark aboard an international flight from Brussels on Saturday. The CDC confirms the man did not have Ebola.

"Procedures are now in place to rapidly evaluate anybody who might be showing symptoms. We saw that with the response of the airplane in Newark," President Obama said.

The president said U.S. health officials are on high alert. Passenger screening will be increased here at home and in Africa.

Many travelers are worried present circumstances are the start of more scares to come.

"People are getting paranoid," said Colleen Delaney, a nurse.

"When you're sick on a plane, it passes around more easily and you can catch things more easily," said Kelly McBean an O'Hare passenger.

But others flying out of O'Hare on Tuesday morning were not afraid.

"As much as I want to say I'm worried, I'm actually pretty confident we'll manage this situation," Jason Plowman said.

"I kind of worry, as a person. But in general, I guess it's just a fact of life and you hope for the best," Gretl Blodgett said.