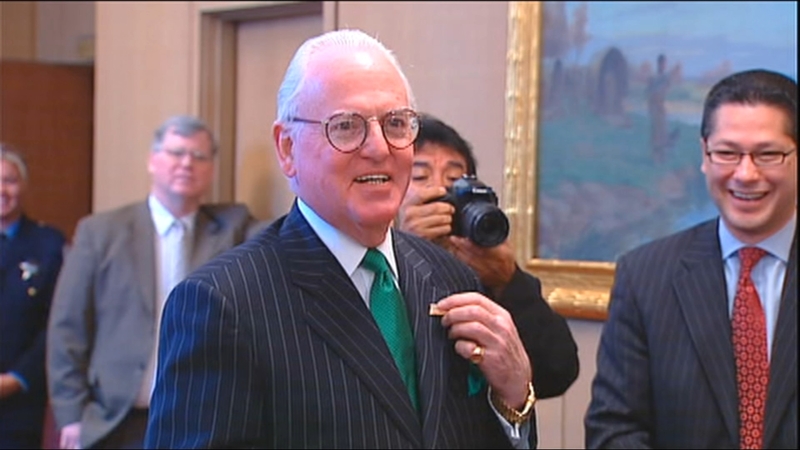 While their work was conducted behind an opaque sheath of beige butcher paper, quickly unfurled and placed over office windows, several sources familiar with the investigation said that agents zeroed in on records related to The City of Chicago workers compensation program.

In 2012, Chicago Inspector General Joseph Ferguson began an investigation of Burke, and the Finance Committee he has chaired for more than three decades, and their control of the city's workers' comp program "without any independent oversight."

The IG's office demanded that Ald. Burke and his committee provide "immediate, unfiltered read-only access to the database(s) maintained and operated for the management of the City's duty disability programs." There was a short-but-vigorous back and forth, with Burke refusing to comply.

"As a result, the City faces the prospect of another year where a $100 million city program will be spent without any independent oversight" said Inspector General Ferguson in July, 2012. "The IGO remains hopeful that it can be given immediate access to these records."

But that never happened, and federal investigators began to move in on the questions surrounding management of city workers' comp.

However, no administrative or criminal action resulted from either investigation in 2012-or since. There were no arrests made or charges filed as of Thursday evening.

Thursday's federal search warrants also come a few months after a federal lawsuit was filed in Chicago challenging the legality of Burke's control of city workers' compensation and alleging that the South Side alderman commands a dozens-strong patronage army under the cover of his Finance Committee. The suit, filed by several former and injured city employees, claims that Burke falsifies his committee budget, understates his staff size and hides information from the public. According to an amended complaint filed this month, Burke allegedly hires unqualified employees who have "worked as a dog groomer, dog walker, hairstylist, waitress, and other jobs unrelated to the administration of Workers' Compensation."

Oddly, there was a scheduled status hearing on the lawsuit in federal court at the same time the raids were underway in Ald. Burke's City Hall and ward offices. Attorney Michael Greco, who represents the plaintiffs in the case, said he was "curious about the document raids" but had no information on them or comment.

"As you are aware, there have previously been several other investigations such as this," Burke said. "In every instance we cooperated fully. And in every instance nothing has been found. So once again we will be cooperating fully and I am completely confident that at the end of the day nothing will be found amiss in this instance either."
Report a correction or typo
Related topics:
chicagoloopchicago city hallfbichicago city councilpoliticsi teamraid
Copyright © 2021 WLS-TV. All Rights Reserved.
I-TEAM
Where do Illinois state workers stand with vaccine mandate?
Who was man in uniform behind Rahm Emanuel at senate hearing?
Chicago storefronts sit empty as retail is reimagined
Video released of deadly Chicago police shooting
TOP STORIES
Baldwin: 'My heart is broken' after accidental film set shooting
Laundrie family attorney speaks out after discovery of Brian's remains
Man admits to throwing wife's body out of plane after killing her
IL reports 2,969 COVID cases, 27 deaths
Source of Dixmoor water problems identified
Rare bacteria found in Walmart room spray linked to 2 deaths
Peter Scolari, 'Bosom Buddies' and 'Newhart' star, dies at 66
Show More
Chicago Sky Champ Dana Evans and the Illinois Holocaust Museum
Kenosha police dog a 'hero' for taking bullet from murder suspect
Private funeral for Chicago civil rights activist Timuel Black
Chicago White Sox mascot 'Southpaw' in running for Mascot Hall of Fame
Officials release cause of family's mysterious death on hiking trail
More TOP STORIES News