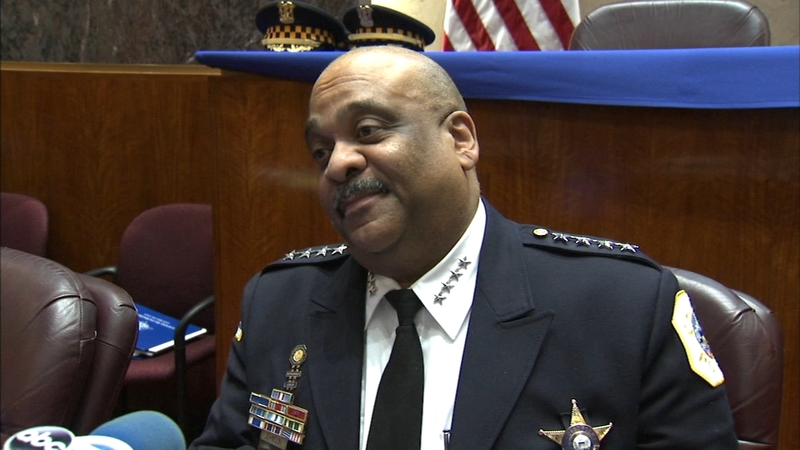 CHICAGO (WLS) -- Mayor Lightfoot took questions for the first time Wednesday about whether or not she will soon need to find a replacement for Police Superintendent Eddie Johnson.

Johnson hinted about retirement earlier this week at the CPD 2020 budget hearing.

Since then, the mayor has been treading very carefully on the subject, even though she met with a member of the CPD brass who could possibly be a replacement for Johnson.

Chief Barbara West arrived at the Mayor's office just before 2 p.m. Wednesday. The meeting lasted for about 45 minutes and then West walked out.

She declined to talk about the meeting as she headed down a side stairwell.

West is one of two high ranking women on the department who are considered potential candidates to replace Eddie Johnson. The other is Chief of Detectives Melissa Staples.

Sources say Johnson's retirement announcement is expected by the end of the week.

"When the time comes and he is gone, then it's appropriate for me to have that conversation, but we're not there yet," Lightfoot said.

On Monday, Johnson hinted he was considering retirement after 31 years with CPD and nearly four years as superintendent. He said it is a decision he will have to discuss with his family.

A police department spokesman said Johnson has yet not made that decision.

"As soon as we make an announcement then I will look at it," Ligthfoot said, "but I want to make sure that we're doing honor and respect to him and to the police department because that announcement hasn't come yet."

The former chief of the Los Angeles Police department, Charlie Beck, is expected in town in the coming days for a meeting with Lightfoot. He is considered a national expert on police reform, and building community trust. City Hall sources said he is expected to be named interim superintendent.

"As an interim superintendent I think that it's good to listen to some of the strategies that have been implemented in LA," said 36th Ward Alderman Gil Villegas. "See if there's a correlation there between Chicago and LA."

A permanent replacement for Johnson would first have to go through the Police Board vetting process.

"Having led the last search for a superintendent, I believe in respecting the law and the police board process," Lightfoot said.

A number of aldermen are hoping Lightfoot eventually picks Johnson's replacement from within the department.

"I think we have some very capably supervisors that are willing and capable of taking the department past what Eddie Johnson has done," said 29th Ward Alderman Chris Taliaferro, who also serves as as chairman for the Committee on Public Safety.

"I think what we need to look for in our next superintendent is someone who is truly committed to rebuilding the trust between the police and the community," said Raymond Lopez, 15th Ward.