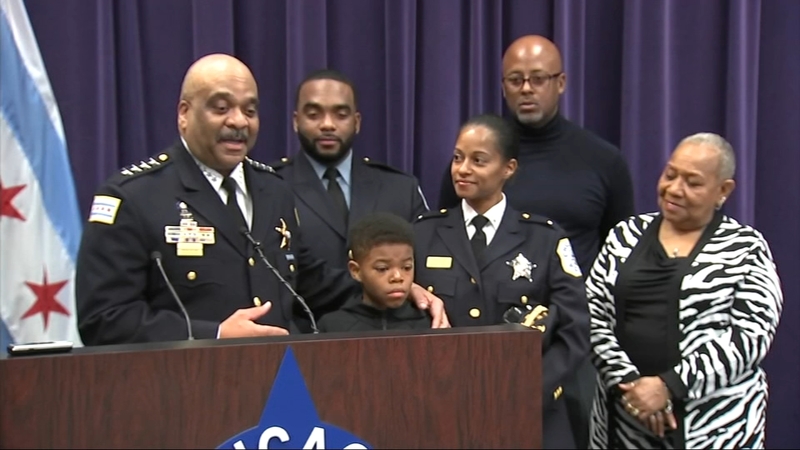 Supt. Johnson made the announcement at CPD headquarters flanked by family members and Mayor Lori Lightfoot.

Chicago Police Superintendent Eddie Johnson announced Thursday he will retire at the end of 2019.

"It is time for someone else to pin these four stars to their shoulders," Johnson said. "These stars can sometimes feel like carrying the weight of the world and I'm confident I leave CPD in a better place than when I became superintendent."

Johnson has served as a Chicago police officer for 31 years, and as superintendent for three and a half years.

He thanked his fellow officers, Mayor Lori Lightfoot, Rahm Emanuel and the city of Chicago.

Mayor Lightfoot said Johnson will serve as superintendent through the end of the year. Lightfoot said she, her team and the department will work to outline their plan for a transition.

The superintendent appeared at an event for students at the University of Chicago Thursday night, and was visibly emotional.

"And I love this department," he said. "So it's not easy, but mentally I'm in a good place."

Johnson said he had been thinking about retiring for months, but really in earnest since September after speaking with the widows of fallen Chicago police officers at a memorial ceremony.

"The mayor and I were sitting next to the waterfall and when I sat down in that seat I leaned over to her and whispered in her ear, 'We've got to start talking about an end date for me,'" he said.

He said he told the mayor, "I am toying with the end of the year or going to April, but I can't do another summer."

Sitting down one-on-one with ABC7 Political Reporter Craig Wall, Johnson said his wife Nikea first prompted him to start thinking about retirement before the mayoral election.

"Shortly before that she started pressing me about, look, you've given a lot to the city, it's about time you sat down took a breather," he said. "So, she has been pressing me since right before the election, and I kept ignoring it, putting it off."

He said after he and his family traveled to London to see the Chicago Bears play, he knew he needed to set a date.

"We were in a restaurant and I just saw their faces, how much they enjoyed me actually being there, relaxed, with no other thoughts," said Johnson. "But then I also realized how much I missed being with them like that."

Johnson hinted about retirement earlier this week at the CPD 2020 budget hearing. He apologized for being evasive when pressed on the issue afterward.

"The other day when you asked me that question, you said have you and the mayor had any talks and I said no, I was just in a tight spot," he said. "I could, I wanted to tell you that I apologize."

He hasn't made concrete plans for his retirement yet, he expects he'll find something to fill his time.

"So you know, I think it's important for me to take a month or so off and just kind of breathe a little bit, and I can tell you this: I'm a high-octane guy so there's no doubt in my mind I will be doing something down the road, but right now I am just not there," he said.

Johnson kept murder numbers going back to before he took office on his conference room white board. It was an important thing to have up, and his biggest motivator.

"It's a reminder to myself and the chiefs every day when we walk in there, I want them to look at those numbers to see where we were in 2016 and where we are now in 2019, and also compared to 2015," Johnson said.

He said the toughest part of the job, at least for him, was communication.

"I think the toughest part of the job for me is trying to get the public to understand how difficult this job is, and that the majority of these officers out here are trying to do the right thing," he said.

And there are still some things he wishes he could have accomplished.

"Well, you know, I wish I could have stayed here long enough to see the consent decree through, because I do believe that consent decree is going to make CPD better," he said.

Wall asked him if he had advice for the mayor in picking his replacement.

So far some names on Johnson's current staff have been tossed around as possible replacements, specifically Melissa Staples and Barbara West.

"You know, I think that all those people know this department and they know the city, so I think they can do it," he said.

"I will tell you this, Craig," Johnson added, "and I tell them this all the time: I don't care how close you are to the superintendent's seat, you still don't know what it's like 'til you actually sit in it."

Ministers on the West Side and other members of the communities of Chicago reacted to the news that CPD Supt. Eddie Johnson will retire at the end of the year.

"Chicago is better because Superintendent Eddie Johnson calls our great city home, and because he dedicated his life to serving it, and I just want to thank him," she said. "This is a tough moment for me, personally."

She also said she supports Johnson and he ends his career with integrity.

"I want to reiterate to the superintendent and the city that he continues to have my unwavering confidence and support," Lightfoot said.

Many in City Hall were not surprised by CPD Supt. Eddie Johnson's retirement announcement Thursday.

The retirement announcement did not come as a surprise to aldermen. Earlier this week he dropped a huge hint about his future plans at a city council meeting to discuss the department's budget.

Many were complimentary of Chicago's top cop, and admitted they are sorry to see him go.

"I was responsible for putting him in," said 30th Ward Alderman Ariel Reboyras. "I think he has done a fantastic job."

"We are seeing a reduction in crime, reduction in shootings, murders," said Alderman Chris Taliaferro, public safety committee chairman. "I think he did a good job, especially what was presented to him."

"He has done good work. He inherited the department at a time that there was huge issues and I think he has worked as hard as he can to deal with these issues as best he could," said 28th Ward Alderman Jason Ervin, chairman of the City Council's black caucus. "I think everybody has a few bumps in the road."

However, some new aldermen who ran on social justice issues do not believe Johnson worked had enough to change the culture of the police force.

"I also know there are those in the black/brown communities who still feel more terrorized by our police department than protected by them, while I don't put that all on Supt. Johnson, it is a reflection of leadership," said 1st Ward Alderman Daniel LaSpata.

"I'm congratulatory on his years of service, but a new direction could be an opportunity for our city," said 22nd Ward Alderman Michael Rodriguez.

Many aldermen said they hope Lightfoot hires someone from within the ranks. Some said it must be someone willing to change police culture and invest in racial equality.

"While being under a consent decree, we have to make some serious changes within our department and the best way to lead that is someone from within," Alderman Taliaferro said.

The new superintendent must be confirmed by City Council.

Sources tell the ABC7 I-Team that Johnson's interim replacement will be Charlie Beck, recently retired as chief of the Los Angeles Police Department.

The Inspector General's Office said if they wrap up the investigation and there is no finding with a recommendation of any disciplinary action to be taken against the superintendent, the case would be closed and the details of the investigation would not be released.
Report a correction or typo
Related topics:
politicschicagolooplori lightfooteddie johnsonchicago city councilchicago police department
Copyright © 2021 WLS-TV. All Rights Reserved.
TOP STORIES
Chicago police have toolkit to prevent repeat chaos in the park
Glenn Foster, former NFL player, dies in police custody: authorities
Omicron detected in Chicago as IL COVID hospitalizations surge
Blackhawks' Khaira responsive after being stretchered off
Man shot, killed outside Chinatown neighborhood school: CPD
Jussie Smollett charges to be considered by jury as trial wraps up
Opening statements begin in trial of ex-cop Kim Potter
Show More
Man killed day before he was to take CPD exam
Fox News Christmas tree fire: Outlet's decorations set ablaze in NYC
2 injured in fiery crash on DuSable Lake Shore Drive exit ramp
Chicago Weather: Clearer, still cold Wednesday
Body of missing man, 64, last seen in Palos Heights found, police say
More TOP STORIES News