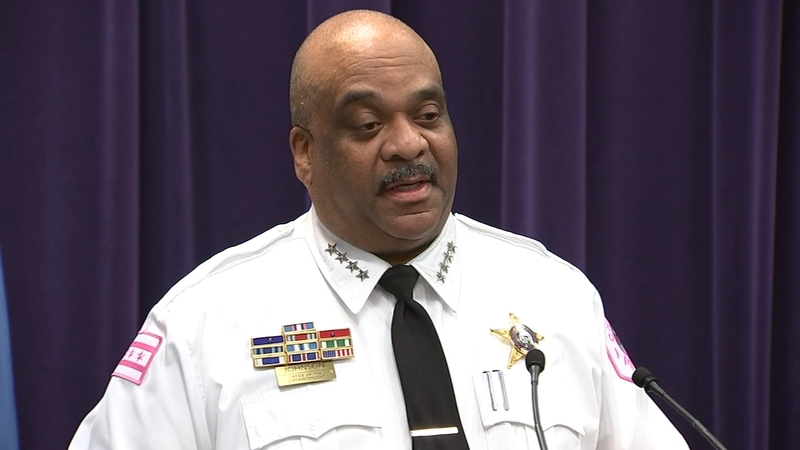 CHICAGO (WLS) -- Amid a flurry of conduct questions, Chicago's top police officer on Friday told Mayor Lori Lightfoot that he had "a couple of drinks with dinner" before he fell asleep at a stop sign while driving home, according to the mayor's interview with the Chicago Sun-Times.

During a news conference on Thursday night, CPD Superintendent Eddie Johnson said repeatedly the unusual incident was caused by a change in his blood pressure medication.

"While off-duty, I was out with a group of friends for dinner and didn't have any feelings or symptoms of impairment or side effects from my medication when I left the restaurant," Johnson said.

He never mentioned that he had been drinking in the meeting with news reporters on Thursday. That information came out Friday straight from Mayor Lightfoot during a Sun-Times interview.

Police officers responding to a 9-1-1 call from a passerby who spotted a man slumped at the wheel, let him drive home without any sobriety tests. Once patrol officers realized who was in that car, there are calls for supervisors to report to the scene, which played out on CPD dispatch radio.

"Somebody being asleep in the car doesn't mean they are impaired in anyway," Johnson said of the predicament that found him in an unmarked police car at a stop sign not far from his South Side home.

Chicago Police Department spokesman Anthony Guglielmi told the I-Team late Friday that, "While we have no indication of impropriety at this time, this question can only be answered by the internal affairs investigation."

It will be the police public integrity unit within CPD's internal affairs division that will look into the circumstances of Supt. Johnson's early Thursday morning street-side slumber.

Determining what really happened and what led up to it typically involves interviews with whoever called 9-1-1, responding officers and in this case, with Johnson himself.

Except for the fact that this case involves the police superintendent, the internal affairs investigation shouldn't take very long.

However it ends, when it does, there will also be police video of what happened, what was said and how the whole thing unfolded.