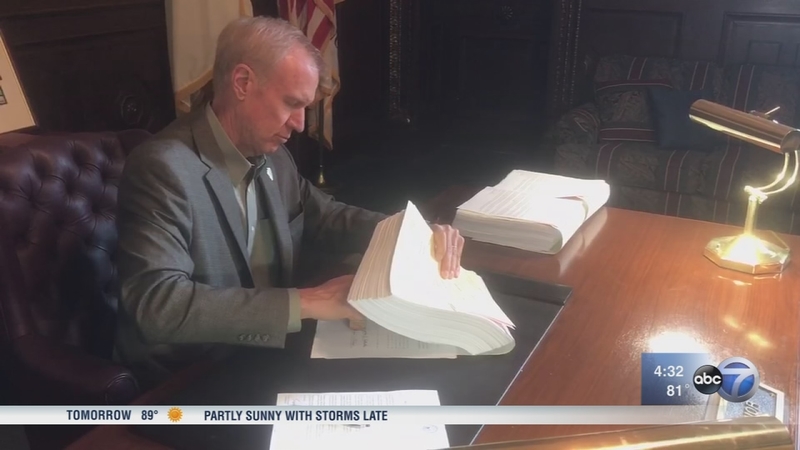 SPRINGFIELD, Ill. (WLS) -- The battle lines are being drawn in the fight over the school funding bill that Illinois lawmakers will take up in a special session that begins Wednesday.

The bottom line for school boards, administrators and everyone involved in educating children is that lawmakers have to approve some kind of funding bill soon or districts won't get their state money in time to open schools in the fall. But there is division about whether the current bill, stalled in the Senate, is the right way to fund education.

"Without knowing what's going on, how I'm going to be funded, what the funding model is going forward, it leaves me in a state of limbo," said Mark Rising, school board member of Indian Prairie School District 204.

Lawmakers in both chambers have passed Senate Bill 1 (SB1), but the governor and many other Republicans oppose language in it that provides additional money to Chicago to help pay for outstanding pension debt.

Tuesday, the Lieutenant Governor met with DuPage County school leaders to address concerns and raise support for what Governor Bruce Rauner wants to do by using an amendatory veto on the so-called "Chicago Bailout."

"He wants to take out the part that provides Chicago Public School pensions a carve-out, a bailout, he wants to take that money instead so it can be equitably and fairly distributed to all classrooms in Illinois," Lt. Gov. Evelyn Sanguinetti said.

But unlike when the governor vetoed the budget bills and was overridden by the General Assembly, there does not appear to be enough votes in the House to override an SB1 veto. That would mean lawmakers would have to negotiate a whole new funding bill, which could mean many schools might not open on time.

On the eve of the special session, Illinois first lady Diana Rauner released a video touting the governor's commitment to education.

"It's about doing what's right, not what's easy. We're doing this for our next generation," she said on the video.

But many school superintendents, especially downstate and in central Illinois, support SB1 even with the extra money for Chicago.

"I would like to see Governor Rauner and the rest of the legislative leaders sit down and behave responsibly, and act in a bipartisan manner to solve this problem," said Rolf Sivertsen, superintendent of Canton schools.

The special session begins Wednesday at noon, but SB1 is still being held in the Senate, a tactic Democrats are using to try to force the governor to negotiate a deal before he has an opportunity to veto the bill. It appears both sides are digging in their heels with much at stake for students.
Report a correction or typo
Related topics:
educationspringfieldbruce raunerschool fundinggeneral assemblychicago public schoolspolitics
Copyright © 2022 WLS-TV. All Rights Reserved.
TOP STORIES
CPD issues alert after violent Belmont Cragin attempted kidnapping
Illinois Primary 2022 Election Results
IL primary results pit Darren Bailey against Gov. JB Pritzker
R. Kelly accusers speak out at his sex trafficking sentencing in NYC
Blink-182 drummer Travis Barker in the hospital in LA: report
Justice Stephen Breyer announces when he will leave Supreme Court
After 18-month-old dies in hot car, dad dies by apparent suicide: P...
Show More
Don't use baby neck floats, FDA warns
Chicago adding concrete barriers to protected bike lanes
Valencia concedes to Giannoulias in Democratic Secretary of State race
Slow effort to ID San Antonio migrant dead, toll rises to 53
3 in custody after 2 attacked in Lakeview
More TOP STORIES News