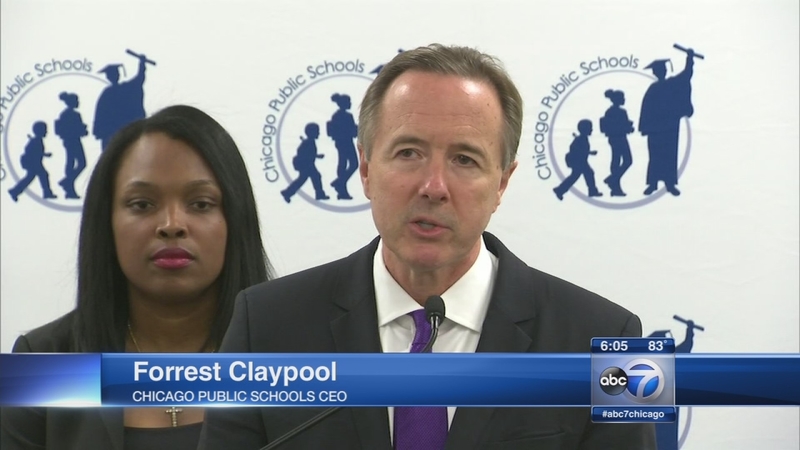 CHICAGO (WLS) -- CPS CEO Forrest Claypool said Monday that the budget he'll present to the Chicago Board of Education later this month is balanced, however, it depends on many things.

The balanced budget depends on future action by state lawmakers and the governor, a yet-to-be approved tax increase and a reluctant teachers union.

He described in general terms how CPS resolved the projected $1.14 billion deficit:

- $173 million in new cuts made during the past fiscal year
- $205 million in new state aid
- $15 million state grant for teacher pensions that presumably will be part of a larger pension deal
- $250 million more generated by an additional CPS property tax
- Over $300 million in miscellaneous revenue, savings and cuts.

Many Chicago homeowners are still reeling from the largest city property tax increase in history for police and firefighter pensions.

When asked for a breakdown of how much more the CPS hike would cost those same taxpayers, Claypool said Monday "No, I cannot."

The $5.4 billion spending plan also assumes that in ongoing contract negotiations, the Chicago Teachers Union will agree to a district proposal that CPS no longer pay the 7 percent teacher contribution into the union retirement system.

"The state stepped up, our local taxpayers stepped up, CPS has stepped up. We need the teachers to be part of the solution," Claypool said.

"If the Board of Education imposes a seven percent slash in our salaries, we will move to strike. Cutting our pay is unacceptable," Lewis said.
Related topics:
educationloopbudgetcps
Copyright © 2021 WLS-TV. All Rights Reserved.
More Videos
From CNN Newsource affiliates
TOP STORIES