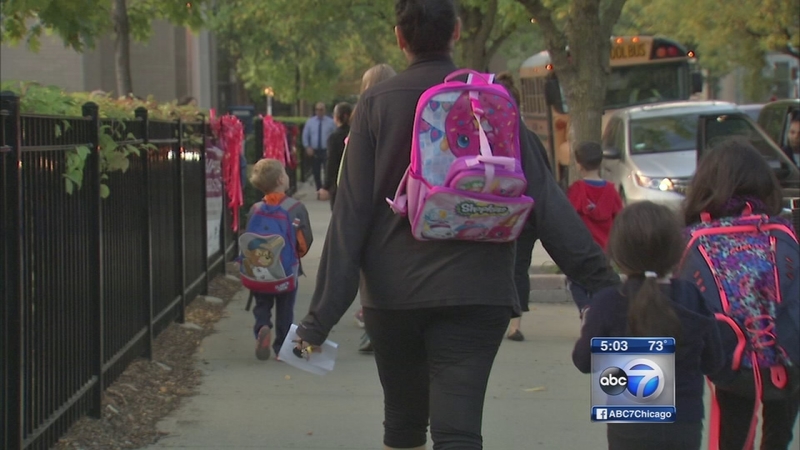 CHICAGO (WLS) -- Chicago Public School students were in class Tuesday after the Chicago Teachers Union and the city reached a deal overnight, preventing a strike.

The CTU has a tentative agreement with the Chicago Board of Education, securing a fair contract for educators and our schools. pic.twitter.com/bvpHHfoSPE

"I'm glad both parties came together at least enough to get our kids in school this morning," said CPS parent Rich Lenkov.

The tentative agreement must be approved by the CTU's membership and House of Delegates, or it's back to the drawing board. No date has been set for that vote.

The next step is the CTU House of Delegates, followed by a vote from the entire CTU membership. The 7% pension pickup remains intact.

Negotiating since the teacher's contract expired a year and a half ago, the union was able to get a four year deal where CPS will continue to pay seven percent toward pensions for current employees. But new members hired after Dec. 31 will have to contribute 9.4 percent of their salaries into a retirement account, which CTU said raises will make up for.

The tentative deal also includes that kindergarten, first grade, and second grade classes with 32 or more students enrolled will get an assistant to help the primary teacher. Also, tenured teachers that are laid off will get more financial support.

"It was pretty tense the whole way through. It wasn't clear to me at 11 p.m. how it was going to land. But it did. So that's good news," CTU Vice President Jesse Sharkey said.

"What we found is that what we ended up with is something that's good for kids, good for clinicians, good for paraprofessionals, for teachers, for the community. We're very pleased we were able to come to this tentative agreement," CTU President Karen Lewis said.

Mayor Rahm Emanuel was relieved not to have another strike occur on his watch. He thanked Lewis and the union for working to reach the tentative agreement.

"Earlier this evening, I had a good conversation with Karen. I compliment her for the hard work she's done to see this agreement through. For working together with a good spirit and common sense of mission to come to an agreement that was fair to all parties," the mayor said.

The union has been fighting for tax increment financing funds, known as TIFFs, to fund schools. The new contract will be paid for using part of a $175 million TIFF surplus, which means some aldermen may have to forgo projects in their wards.

"I do have a huge concern with respect to that," said Howard Brookins Jr. of the 21st Ward. "That is why we need to look for more permanent solutions to fund education."