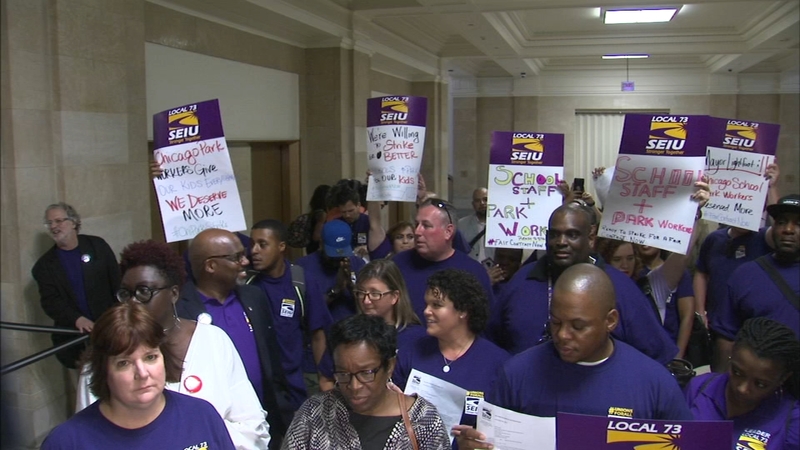 This comes as the Chicago Teacher's Union is resuming contract talks, which could determine whether their members will walk off the job.

It's a triple threat to the city and Mayor Lori Lightfoot believes it can all be avoided.

"We should get a deal done," she said. "Every single one of these unions whether it's CTU, whether it's SEIU for the schools or SEIU for the parks. We put out very specific, fulsome proposals and we need at least a counter at the table. So let's get the deal done."

Mayor Lightfoot spoke to the media as the city holds tight to the 16 percent raise over five years for CPS teachers.

The Chicago Teachers Union, however, is still pressuring the city for more nurses, counselors and librarians. Wages and healthcare costs are the primary issues.

"If we are able to strike the deal that we've, on the terms that we've proposed, you were looking at people getting 7% increases, 9% increases, 15% increases," Lightfoot said.

Wednesday, teacher's union delegates will vote to set a strike date. The earliest they could walk off the job is October 7.

Their union hand delivered strike notices to the mayor's office at City Hall and they could walk out within the next two weeks.

With the teachers, the park district employees and CPS support staff, the city could see three strikes at one time during the month of October, which would mean about 35,000 workers could be walking the picket lines.

If the teachers and the park district were to walk out around the same time, that could be problematic for CPS parents who rely on park district programming for an alternative to school if it's not in session.

"We got a sympathetic ear, we didn't get anything in writing, we'll see where that puts us," said Jesse Sharkey, CTU President.

The mayor said the city does have a contingency plan for that, but again believes it can be avoided.

"What I want is really bargaining, what I want are written counter proposals on the issues that we have put on the table, we are wasting precious time," the Mayor said.

The teachers are in a bargaining session with the city again Tuesday.