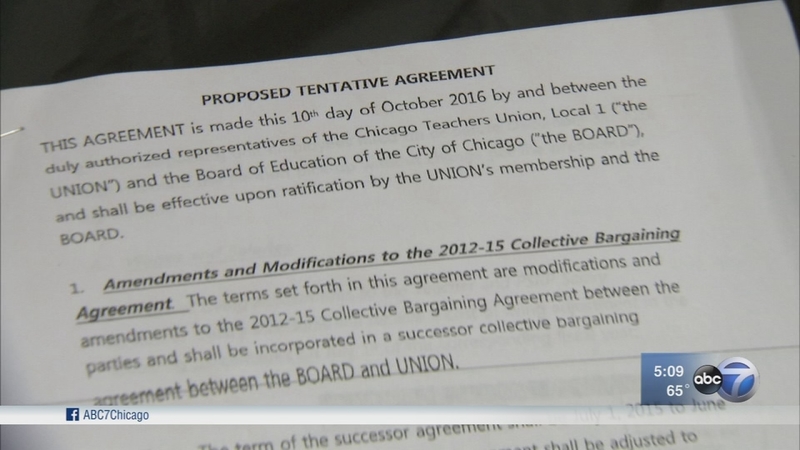 CTU to vote on tentative contract

CHICAGO (WLS) -- The Chicago Teachers Union's House of Delegates voted Wednesday to approve a tentative contract deal with the city. The full rank-and-file will start voting on the contract on Oct. 27.

The delegates were expected to approve the contract, but can the city afford what's being promised in the new deal?

The four-year contract means about $300 million more for schools, including higher pay for teachers and programs for students, union leadership said. Teachers, paraprofessionals and clinicians will vote starting Oct. 27.

The union had threatened to strike on Oct. 11, but a deal was struck before and it paid off for CTU. The union won significantly more in the new offer than the deal the school board proposed months ago.

"I think this is proof that Rahm Emanuel and the school district got rolled by the CTU. The district has already asked taxpayers to put in more through higher property taxes. They've raised utility taxes, they've borrowed billions at junk bond rates to pay for the schools. It just can't go on," said Ted Dabrowski, vice president of the Illinois Policy Institute, a conservative- and Gov. Bruce Rauner-backed organization.

Dabrowski questions how the city is going to pay for the new contract. While Tax Increment Financing (TIF) funds will help cover the cost, Dabrowski and others said it is not enough to make up for the loss of pension money.

For months, Chicago Public Schools was adamant about having teachers contribute more to their pensions, however, the tentative agreement calls for CPS to continue picking up the cost for current teachers. New teachers will have to contribute, but a raise makes up for it.

"Something that was so important to the administration, they already had it baked in the budget, they teachers would pay their own fair share, and CTU won that one," Dabrowski said.

At City Hall, some said avoiding a strike with an important union was worth the price of the contract.