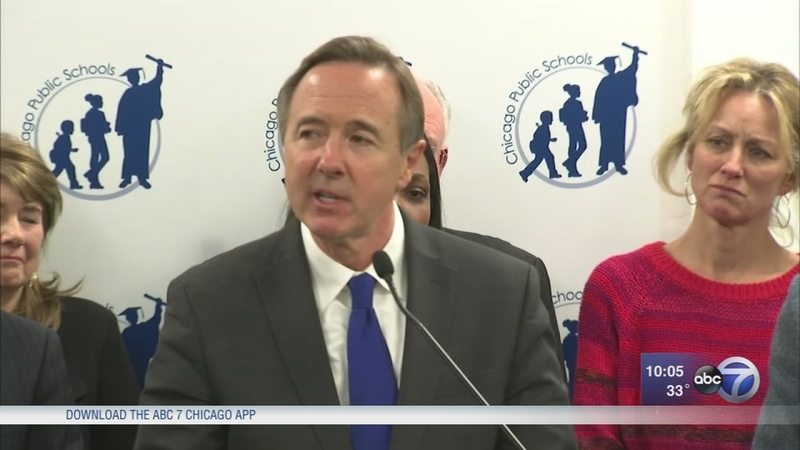 Chicago Mayor Rahm Emanuel recommended Dr. Janice Jackson, who currently serves as Chief Education Officer, to replace Claypool. Clark said the school board will vote on the recommendation at their next board meeting.

"When I took this job I knew it would be the toughest in my public career. It's lived up to that expectation, though, in perhaps some unexpected ways," Claypool said.

Claypool walked out of the press conference without explaining why he resigned. Instead, the news conference focused on his career successes.

"He has always gone in with his sleeves rolled up, ready to get the job done. And I can say he can walk out with his head high because he did a job well," Mayor Emanuel said.

Clark and Emanuel both praised Claypool for his work with Chicago Public Schools, as well as his previous work with the Chicago Transit Authority and Chicago Park District, and said he put all three agencies on better financial footing.

Claypool had been under fire since the CPS Inspector General released a scathing report accusing Claypool of lies and a cover-up in an ongoing ethics probe.

"It's all the action that he took after our investigation was underway, the manipulation of the documents, the refusal to pay the bill and then the lies. That's what compounded this," said CPS Inspector General Nicholas Schuler.

"We all make mistakes, some bigger than others, but I believe in redemption and forgiveness, but also in consequences. This was a consequence," said former CPS board member Jesse Ruiz. Ruiz is also running for Illinois Attorney General.

"Claypool has done a lot of damage to the schools in the city of Chicago. Reputational damage, we've seen tens of thousands of families, especially black and brown students and their families, leave. He's undermined their credibility, there's been a moral taint about his office. Good riddance, glad to see him go," Sharkey said.

Sharkey also said the consequences Claypool faced needed to be addressed at the press conference, instead of putting praise before punishment.

"That really struck a wrong note. I mean, we want to send the right message to children. It should be that if you do something unethical and repeatedly lied about it, certainly if a teacher did that we'd be fired," he said.

The Inspector General's report stemmed from an ethics probe into CPS' top lawyer Ronal Marmer. Schuler said Claypool's handpicked CPS attorney violated district ethics policies by hiring his old firm to handle a civil rights lawsuit against the state on school funding. The problem was that Marmer was still receiving severance payments from the firm.