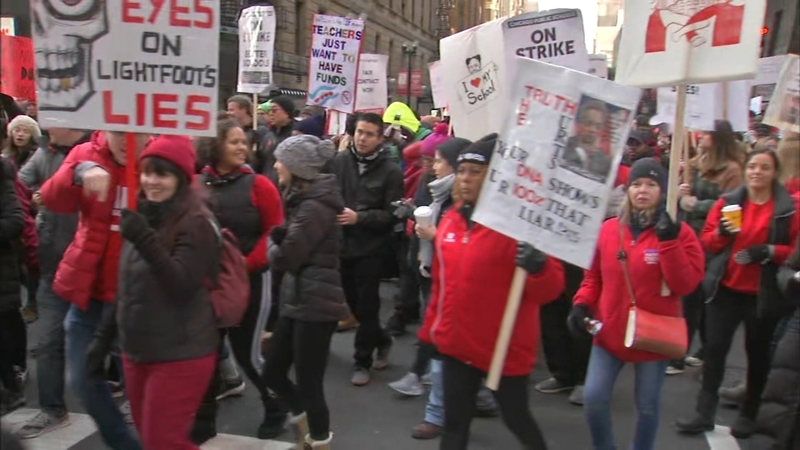 Teachers, special education assistants, librarians, security officers; the Chicago Teachers Union and SEIU strikers gathered at locations around the Loop and walked over to City Hall during Mayor Lightfoot's address , and then on to the Thompson Center. Chicago police estimated the crowds downtown numbered approximately 20,000. The union said 30,000 people turned out.

The union appears to be preparing for an even longer stalemate, as they scheduled a civil disobedience training session for its members Thursday afternoon.

A week into the strike there is still no agreement between CTU and CPS on critical issues, including a numerical cap on class size, length of their contract, pay, and health benefits. The union said negotiations continue to creep closer to a consensus, but the two sides of the table are still very much divided.

"We would rather be in schools, but we can't be in schools with the conditions being terrible and we don't have a contract," said Florian Palucci, Whitney Young High School Teacher.

The teachers union has long touted a $1 billion budget infusion meant for CPS, but the mayor maintains that by law most of that money is already spoken for, and must be used toward teacher pensions.

"What we're trying to do is make sure that there is real fiscal rigor around the offers that are on the table," Mayor Lori Lightfoot told the Chicago Sun-Times editorial board Wednesday. "Anybody who has talked to the bargaining team in my conversations with them they're very clear that there's not this big pot of money either at CPS or at the city, so we have to be very, very prudent in what we're putting on the table and how we're responding to the various proposals that are coming from."

With the public at large growing weary of the strike, union leaders acknowledged that progress is being made but said sticking points remain.

Teachers on the ground Wednesday put a human face on their demands.

"When you have 35 kids in a classroom that all have different learning styles, it's literally impossible to reach almost any of them," said Rachel Laliberte, Lincoln Park High School teacher.

"We're tired of hearing 'go back to work,'" said Julie Waller, LaSalle Language Academy teacher. "We're doing this for the kids. We're not doing this for a raise. None of us really care. We're used to not getting a raise."

During her budget address, Mayor Lightfoot did announce a Tax Increment Fund (TIF) surplus, which would provide teachers with an additional $66 million for next year's funding. However, that money only covers the offer that is currently on the table.
EMBED More News Videos

Striking Chicago teachers and their supporters rallied in the Loop while Mayor Lori Lightfoot delivered her budget address.

"I know a lot of people question the efficacy of the strike, but I don't think that you can discount the justice we're trying to bring about today," said CPS teacher Bill Chlumsky.

"We don't need to work three or four jobs to maintain our families," said Citali Soto, Board of Education safety and security officer. "That is absurd. That is ridiculous. I work three jobs. I can't be home with my son."

Wednesday morning, Mayor Lightfoot once again called on the union to continue to bargain but call off the strike so that kids can go back to class.

The CTU said the mayor has promised Chicago she would do better and it's time for that change now.

"We're teachers. We're going to read your homework assignment. You turn in half a paper, then we're not going to give you a complete grade for that. She is going to have to do enough for us to say this is fair and it's a real change for our schools," said CTU President Jesse Sharkey.

A national spotlight is on the teacher's fight. Former Vice-President Joe Biden called union leaders Tuesday, the same day Democratic presidential hopeful Senator Elizabeth Warren made a trip to Chicago to show her support for the strike.