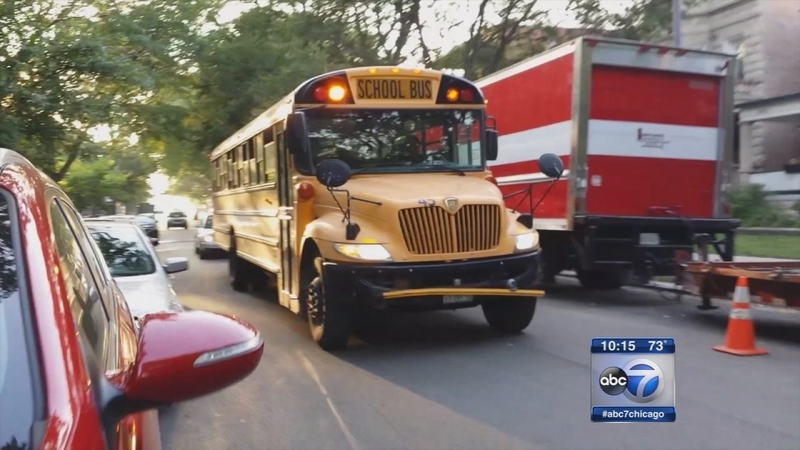 CHICAGO (WLS) -- Angry parents called the I-Team about Chicago Public Schools' bus delays. Parents said their children at two schools are chronically late to class and they can't count on the bus system their tax dollars pay for.

The I-Team had those parents to use smartphones to document the problem. They say their children are sitting on buses up to an hour and a half each way, and sometimes miss the first half hour of school.

A recent video sent to the I-Team from a parent of a student at Skinner North in Old Town shows, the parents say, the bus arriving almost 25 minutes late.

Another video was recorded by the parents of Anne Uzelac , who goes to Pritzker Elementary School in Wicker Park. On this day, her parents say the bus at her drop off location showed up almost 30 minutes late.

We were there as her parents patiently waited on a different day. The bus was again, they say, about 25 minutes late.

"We're always late. So, I barely get to have breakfasts except maybe a thing of milk or sometimes not even breakfast because there is nothing left," said Anne Uzelac, CPS student.

"It's very disruptive, you know for my family, and I imagine for many more," said Vladimir Uzelac, a parent.

"So far this year and we're in the third week of school, she's been late 50 to 75 percent of the time, coming late to class, interrupting class," said Danica Uzelac, a parent.

Kids say the six-mile trip was almost an hour and a half. It's so long, this child's family says he regularly falls asleep. His older sister carried him from the bus.

The I-Team obtained a letter from Pritzker's principal outlining the chronic problem to CPS officials, writing "students left waiting at bus stops for over an hour," "some of our students are on buses for over two hours", "we have had several buses not show up to certain stops" and "students left behind due to a lack of communication."

"I find it distressing and I'm nervous about how it's going to be when it's bad weather as well. And then also it makes it a challenge because they have homework every night. And by the time he get home, we have dinner it's really tough to get that in and get them to bed on time so they can get to the bus really early," said Jennifer Peterson, a parent.

Parents believe the slowdown this year is due to a new "staggered bus schedule" program designed to streamline transportation for CPS, which is facing a more than a $1 billion operating deficit.

"They need to find another place to take the money from... and not have them on these buses for an unreasonable amount of time," said Danielle Bridges, a parent.

The I-Team brought the concerns to CPS, who said that starting Monday, Pritzker would get an additional bus route. In a written statement, CPS said: "Chicago Public Schools monitors the on-time performance of its buses on a daily basis and takes the necessary steps to ensure that students arrive at school on-time and ready to learn. As a result of improvements this year, our on-time performance is up by 7 percent compared to last year and we will continue to make corrections to improve, including adding routes."

CPS did not specifically comment on the complaint we received from Skinner North Elementary. The school district also said transportation can be challenging for schools like Pritzker, which draws students from across the city and can have routes up to 20 miles long.