WABC
By Stacey Sager
UNIONDALE, N.Y. -- A Long Island teacher was removed from the classroom after he posted on Facebook claiming he had failed two students for refusing to stand for the Pledge of Allegiance.

The Uniondale school board is investigating Steven Solomon over the alleged incident, which happened more than a decade ago, after the post sparked controversy.

It all stems from a comment Solomon posted on a friend's Facebook page, speaking about a pair of students at Uniondale High School who he failed years ago after they wouldn't stand for the pledge. He wrote: 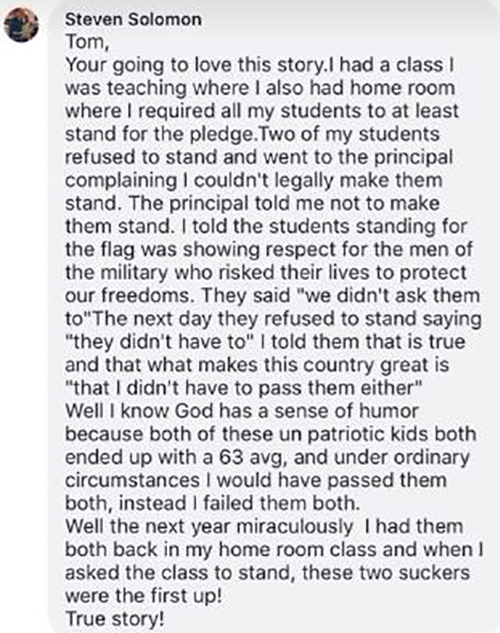 Now, the health teacher is telling his side of the story exclusively to Eyewitness News.

"Because I want kids to have respect and stand for the pledge and have respect for people in this country, they want to try to suspend me and fire me?" he said. "What message does that show?"

Solomon had been praised for his work with at-risk youth, even teaching boxing in a first-of-its-kind after-school program. But now, he's been pulled from any student interaction altogether.

"It's upsetting to me, the things people say," he said. "These students failed themselves. They had less than a passing grade, and that combined with poor behavior, which included, part of it was they didn't stand for the pledge, they said they didn't care if these military people lived or died. They were disrespectful to their own family, to students, to me. They had many behavioral write-ups. So it was a combination. What am I supposed to do, reward kids with a failing grade who have poor discipline?"

Still, many said it was the fact that he used the word "suckers" and called them unpatriotic that was outrageous, more so than his methods as a teacher.

"This was 10 years later, in a Facebook post, goofing off to a friend," he said. "I thought this just went to him. This person said, 'Teachers don't teach respect anymore, don't have kids stand for the pledge anymore.' And I said wait a minute, that's not true. I told him the story. I was goofing off about that. But they're not choir kids, either. These are kids who say they don't care if these military people live or die...I never put down any kid I ever taught. I bring kids up. I build the kids up. I regret that that came out. That was meant for one person to read. Not everyone."

He also categorically denied that these students failed solely for the incident regarding the pledge.

"To say that they failed because they didn't stand for the pledge is untrue," he said. "I could see people misconstruing that. It was poorly written, and you know what, if I had written that for the public, I'd have written it differently."

He said his main tenet in the classroom in respect, something he teaches and expects in return.

"I tell the students every year, more important than their health grade or any grade, in my opinion, is respect," he said. "They're going to go further in life with respect. They're going to be more successful. They're going to be happier. They'll just be better people...And I'm supposed to reward kids who don't stand for the pledge, who show no respect for anything in the school? And guess what? When they came back to my class, and I talked to them about respect and standing for the pledge and being better citizens, they passed the following year. They were better citizens, and to this day, I'm sure they're better people for that. That's what a teacher is all about, educating."

Teacher accused of failing two students who didn't stand for the pledge speaks out.

In this case, though, many disagreed with his message.

"When I saw that post, it just enraged me," parent Terenna Williams said. "He disregarded what the principal said. Said it's OK, and then he failed these students because he can."

Parents and students say that at the very least, Solomon's name calling promoted a sort of double standard.

"If it's wrong for a student to go on Facebook and say anything about a teacher, we would automatically get a consequence and get in trouble for it," sophomore Imana Alston said.

And they say they're not sure what's more troubling, that Solomon would have passed undeserving kids or that he chose to fail them because of the Pledge of Allegiance.

"They have a choice to stand, sit, kneel, do whatever they want," parent Kenneth Alson said. "This is a free country.."

"The Uniondale School District is aware of a teacher posting on social media about a situation involving grades and standing for the Pledge of Allegiance that occurred more than a decade ago. The District has taken the proactive measure of assigning this faculty member to out-of-classroom duties until further investigation into the matter can be completed. The District will make available any information that is uncovered that can legally and responsibly be released to the public."
Report a correction or typo
Related topics:
educationnew yorkfacebookteacheru.s. & world
Copyright © 2020 WABC-TV. All Rights Reserved.
More Videos
From CNN Newsource affiliates
TOP STORIES