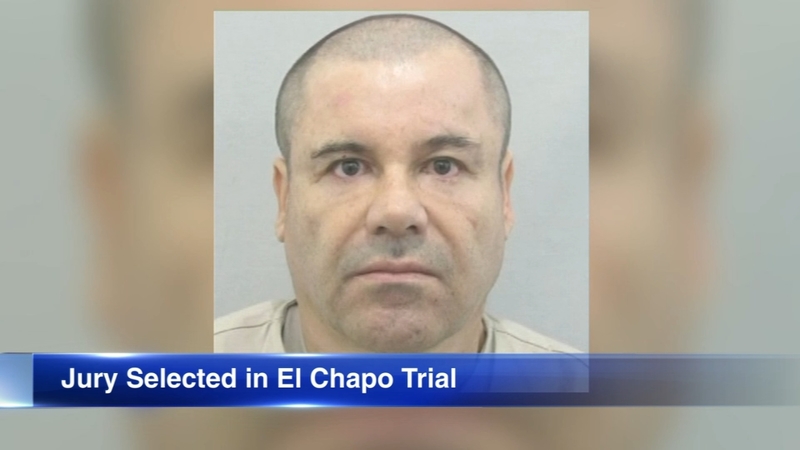 NEW YORK -- Jury selection at the U.S. trial for Mexican drug lord Joaquin "El Chapo" Guzman was completed Wednesday with Guzman waiting for word on whether he can hug his wife for the first time in nearly two years.

A jury of seven women and five men are to hear opening statements Tuesday in the drug-conspiracy case against Guzman in federal court in Brooklyn.

Guzman has pleaded not guilty to charges accusing him of overseeing a drug cartel known for violence and for breaking him out of Mexican jails.

The notoriety has prompted security measures that include keeping the jurors anonymous. Guzman also has been held in solitary confinement and barred from seeing his wife out of concerns he could pass messages to his cohorts.

Earlier this week, a defense lawyer asked U.S. District Judge Brian Cogan to grant a "humanitarian gesture" of letting Guzman greet his wife in the courtroom before the jury enters.

Allowing "an embrace with the railing between them would not pose a threat to security," the letter read. The judge didn't immediately rule on the request.

Most of the people picked either for the jury or to serve as six alternates said in initial screening that they had heard of Guzman through news reports or TV shows. They include a man and a woman said they are fluent in Spanish and a man who's a retired corrections officer.

The judge put off swearing in the jurors until next week out of concern some still might try to duck duty for a trial expected to last into next year. He told lawyers that one of the jurors, after learning she was picked, wept while privately telling him she was afraid of the unwanted attention she would get if it was found out she was on the panel.