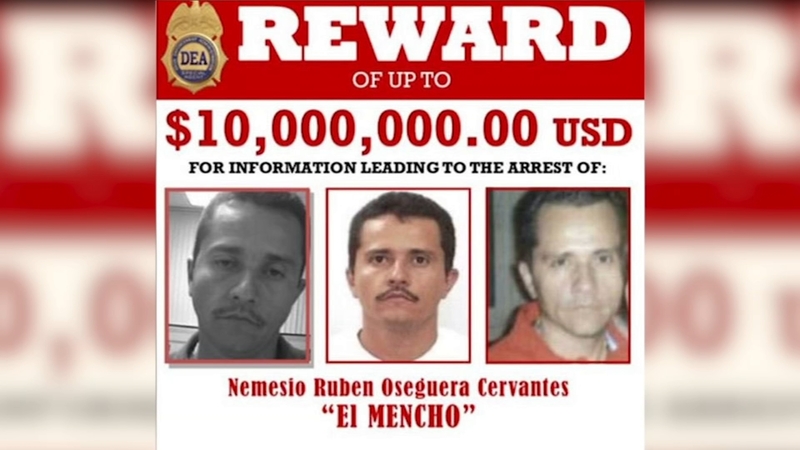 CHICAGO (WLS) -- There is now a $10 million bounty on "El Mencho," considered by federal law enforcement to be the overlord of Chicago's illicit drug world and the city's "public enemy number one."

El Mencho's full name is Nemesio Ruben Oseguera-Cervantes, and he is believed to oversee a North American drug empire from rolling locations in Mexico. Cervantes, 52, is the alleged leader of the New Generation cartel and is said to have moved in to a fill a void left by the extradition and jailing of drug kingpin Joaquin "El Chapo" Guzman who awaits trial in New York.

El Mencho was named in federal indictments on Tuesday during an announcement from U.S. Attorney General Jeff Sessions. While one of 15 people charged in various U.S. jurisdictions, federal drug agents say El Mencho is the richest and most ruthless cartel boss currently operating in Mexico, signified by the mammoth, $10 million dollar reward now posted for his capture.

In March the ABC7 I-Team reported that El Mencho had been labeled as Chicago's new public enemy No. 1 by officials of the U.S. Drug Enforcement Administration. El Chapo previously held that title.

Although no formal announcement has been made of El Mencho's ascension to the top public enemy spot, the attention afforded by Attorney General Sessions was tantamount to such an endorsement. Sessions said on Tuesday that that El Mencho was facing drug trafficking charges in Washington, D.C. and Mississippi.

His organization is known in Mexico as the Cartel Jalisco Nueva Generación and thought to be headquartered near Tijuana.

The drug trafficking group, also called CJNG for short, is one of Mexico's largest and most powerful cartels and has been battling for control over the Tijuana plaza with the older Sinaloa cartel-once run by El Chapo.

"We consider this cartel, New Jalisco, to be one of the five most dangerous trans-national criminal organizations on the face of the earth," Attorney General Sessions proclaimed while flanking a large wanted poster of El Mencho.

"El Mencho" Cervantes' son was also indicted on charges in D.C. Ruben Oseguera Gonzalez, or "El Menchito," is alleged to have been second-in-command until his arrest in Mexico in 2015.

CJNG was formed in 2011 and has grown in size and scope, according to U.S. drug agents, because of its leadership's ability to control production and transportation routes. The CJNG is also known for unforgiving rules of discipline.