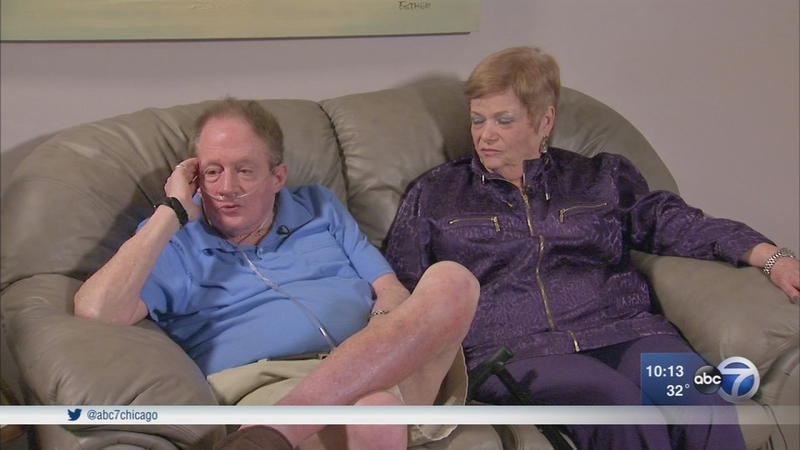 CHICAGO (WLS) -- You would probably be concerned if an older person with memory issues gave up more than $10,000 - especially to someone they met at a racetrack.

Mount Prospect police said they helped in a case where that happened and want to warn the public about "suspicious loans."

Howard Saper, 76, shared his story of financial loss with the I-Team.

"It's sad I try to conserve on money not doing anything," said Saper's ex-wife, Renee Saper. "It's already hard because Howard is on oxygen."

"I thought we were really good friends," Saper said.

Saper said Froustis claimed the money was an investment for coffee.

"I wanted to come over to see his coffee and he kept giving me excuses," Saper said.

An $8,000 loan to Froustis was recorded in a March 2017 promissory note. Signed documents did not mention a coffee business.

The Sapers showed the I-Team checks for that loan cashed by Froustis, plus more cashed checks for another $2,900, for a total of $10,900.

When they did not receive any money in return, the Sapers filed a report with Mount Prospect police in October 2017. The report claims that Froustis took advantage of Saper after meeting him at a racetrack in Arlington Heights.

"He would take him grocery shopping, when he would have to go to the doctor he would take him," Renee Saper said. "He did anything possible to gain his trust. He took him everywhere. "

Saper had been fighting several illnesses like Dementia and was more recently diagnosed with "probable" Alzheimer's disease and chronic pulmonary disease.

"How can you take advantage of man who's 76 years old?" said Renee Saper. "We don't know what the future is going to bring. How can you do this to him? This is very sad. I'm his ex-wife living with him because there's no one to take care of him. "

Renee Saper cared for Saper until he passed away about a month ago.

Before Saper died, Mount Prospect police were able to step in and help. In December 2017, Froustis verbally agreed to start making $200 monthly payments to the Sapers.

Police said since Froustis had no prior record and there was no proof of the deception, he was never charged.

Police said the case could be reopened if Froustis stops paying.

We wanted to learn about the incident from Froustis's perspective. When Froustis did not respond to calls and emails, the I-Team stopped by his apartment in Northwest Chicago.

Froustis did not want to answer questions but confirmed he was paying the Sapers back.

"So the warning is that if we have family members that are older in age, we might be worried that they will fall victim to scams and fraud," said Greg Sill of the Mount Prospect police. "So maintain their bank account, power of attorney."

"We obviously need to be more aware of where they are spending their time," Sill said. "We're not saying you need to be skeptical of everyone but pay attention, new friends and relationships."

The I-Team checked with estate attorneys who said even though Saper passed away, his family still has the legal right to collect the balance of the loan. But that's money Saper himself will never see.

"I forgot about it because I know I'm not going to get my money back and whatever you guys can do, I'll appreciate it," Saper told the I-Team before his death.

Legal experts said that if you make a private investment with someone, you should always have a contract that spells out what the investment is and when you might see some kind of return.