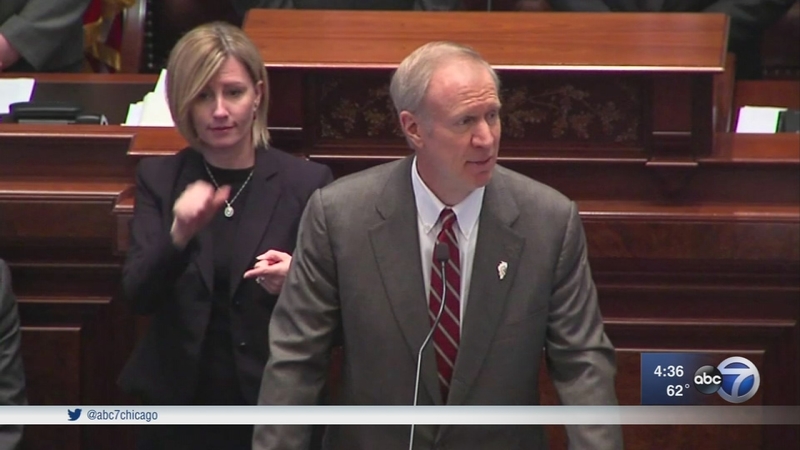 CHICAGO (WLS) -- Will Donald Trump's presidential plans help unify his party nationwide and in Illinois? Many are unsure, especially in Illinois.

Party unity all depends on what plans Trump decides to pursue. Many Republicans are hopeful the president-elect will abandon ideas like the wall on the Mexican border, but move forward on repealing Obamacare.

And his victory may not be good news for all Republicans.

Trump ran on the GOP ticket, but during the election many Republicans ran away from him, including Illinois governor Bruce Rauner.

"There may be some Republicans who are very upbeat about the fact that they won the White House. I'm not sure Bruce Rauner would be one of them," said David Axelrod, director of the University of Chicago's Institute of Politics.

Rauner is up for reelection in two years. Traditionally, the party in the White House does not perform well during midterm elections. Coupled with the fact that Rauner didn't support Trump and Illinois overwhelmingly voted against him, political experts said Rauner may have been better off with a Clinton win. Illinois Republicans are hoping their legislative victories on Tuesday will help Rauner in 2018.

"We picked up four seats in the Illinois house, two in the Senate, so I think we'll have a tailwind in 2018 and I think it's going to help Gov. Rauner and Republicans statewide," said former Illinois GOP party chair Pat Brady.

"I don't think the marginal victories he scored in the legislature, on which he spent tens and tens and tens of millions of dollars, offsets the atmospheric disadvantages of Trump in the White House when he has to run for reelection," Axelrod said.

A former advisor to President Obama, Axelrod said Trump's victory puts many anti-Trump Republicans in a peculiar situation, and getting all Republicans on board depends on how Trump chooses to govern.

"What I'm hearing from DC folks is that he's going to take the right direction, tone it down to work on policies that help American people," Brady said.

"I'm not sure has thought them through yet, because until about 8:30 Tuesday night Donald Trump did not expect to be president of the United States," said Axelrod.

Despite the unknown, anti-Trump Republicans said it's time to get behind him and give him a chance to govern. Rauner released a statement after the election focusing on bi-partisan action to move forward. He did not mention Trump's victory and has not said anything since.

A Chicago businessman who supported Donald Trump is offering his insight into what Trump's administration may look like.

After playing a prominent role in the Obama administration, Chicago is expected to take a back seat when Trump takes office. But a Chicago businessman who has supported Trump from the beginning is now offering some insight into what a Trump administration could look like.

Ron Gidwitz is a name familiar to fans of Illinois politics. He ran for governor in 2006 and first supported Jeb Bush, but then was persuaded to get on board with Trump's Illinois efforts. He was flown to the West Coast where he met Trump himself.

"He was extraordinarily personable, very smart, and I walked away saying I am impressed with this man," Gidwitz said.

Gidwitz ended up raising about $5 million for the Trump campaign, a sixth of what he said he was part of raising for George W. Bush. But he felt the businessman and reality TV star would win anyway due to his sense of people's fears. He said Trump will appoint experienced hands.

"He is an executive. He is not going to do it himself, he is not a micromanager," he said.

Gidwitz said rising health care costs for some working class people propelled many Trump voters to the polls, and the Obama administration's unwillingness to modify it according to Republican demands doomed Obamacare.

"It's obviously a terribly-constructed piece of legislation. The result of which is partially responsible, in my view, for Donald Trump getting elected," Gidwitz said.

While not speaking for Trump, Gidwitz predicts he will not change key Obamacare provisions like coverage for those with pre-existing conditions, or allowing children to stay on parental benefits to age 26. He also doesn't think there will be much of a construction project on the Mexican border.

"It is very unlikely that he expects to build a wall for the very reason that a wall doesn't work," said Gidwitz.

So then what about all the campaign rhetoric?

"I think it is up to all of us, including you folks in the media-you need to have a more balanced portrayal of what this next administration is going to try to do," he said.