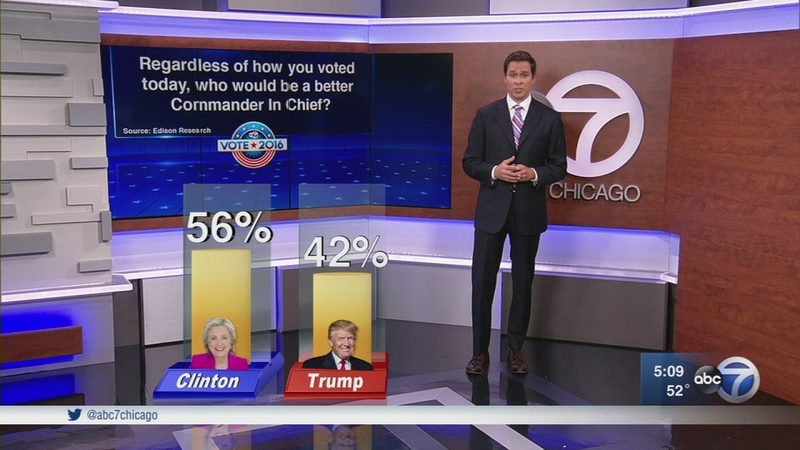 CHICAGO (WLS) -- Since polls in Illinois opened at 6 a.m., long lines of voters have been reported throughout the Chicago area. Election officials are expecting a record turnout.

Following accusations the election system was rigged, voters were asked how confident they were the votes would be counted accurately. Seventy-nine percent said they were very confident in the system.

Voters were also asked about the candidates' trustworthiness. When asked if Hillary Clinton is honest and trustworthy, 59 percent said "no" and 39 percent said "yes." They also posted the same question about Donald Trump, with 76 percent responding "no" and about a quarter saying "yes."

When it comes to the economy, 49 percent said Hillary Clinton could handle the economy better.

Finally, pollsters asked voters to answer who would be a better commander in chief, regardless of how they voted. Fifty-six percent said Hillary Clinton, and 42 percent said Donald Trump.

Long lines of voters are being reported throughout the Chicago area in what's expected to be a record election turnout.

The voter turnout in Chicago is on a parallel course with the last two last presidential elections, and could end up even up higher.

Marisel Hernandez, chairwoman of the Chicago Board of Elections, said there would be same-day registration in Illinois for the first time in a presidential election.

"If early voting is any indication, I think we're going to have a very solid turnout," Hernandez said. "I am asking people just to be patient, civil, respectful and realize we are doing this for the first time. There's going to be a lot of people out there and just be patient."

Hernandez also said she is confident in the voting system that is in place and that there is a paper trail for every voting machine.

"I'm so excited. No matter which way you slice it, this is an historic day. Growing up I always though presidents could be one gender, one color. Well, we proved that wrong the last couple times around and we're proving that wrong again," said voter Eve Adams, who took advantage of same-day registration.

According to an unofficial count by Chicago election officials, 40,609 early voting ballots were cast Monday in Chicago - the largest single-day total - and more than 325,000 Chicagoans voted early this year. That total does not count more than 62,000 mail votes.

Lines off to a good start! #Election2016 @ABC7Chicago pic.twitter.com/9ShFyWwO8J

Voters Tuesday said they know the stakes are high and they wanted to do their part.

"It's very important for the country and I'm just glad everybody has come out," said Chicago voter Ramon Henderson. "I tried to go early but it was kind of crowded so I just decided to get up early this morning and come in and do it."

"I think a lot of people have been really blasé about making the time to come and vote in the past but this year the election has taken everyone in," said voter Kim Lewis.

Hundreds showed up at 6 a.m. in Naperville to cast their ballots.

In DuPage County, voters have many local seats and referendums on their ballots.

One of the biggest issues facing voters is a new $53 million proposal to build a new school in District 181 in Hinsdale. There is also a referendum on the ballot to put an end to Naperville's township government.

Downers Grove will ask residents how to pay for a $3.9 million storm water management system in a three-part referendum.

"My goal is to make my voice heard and I live around the corner, I have to work today and so I made the sacrifice as others have made the sacrifice to vote," said DuPage County voter Deitra Tribble. "I got up early, I voted and my vote counts."

"If people want to cast their vote, they see it as a big decision to make between two candidates that are pretty much opposed on many issues and it's just a lot of excitement when there is a lot of voter turnout, especially early," said DuPage County voter Maureen Lowry-Fritz.

The talk of the day was who people were voting for in the presidential race.

Tribble said she voted for Hillary Clinton because, "She knows what she's talking about. The other guy is not poised."

DuPage County voter Bayer said it wasn't easy to reach his decision and said voted for Donald Trump because he dislikes Hillary Clinton.

"I held my nose and voted for the Donald," he said.

The possibility that Hillary Clinton could become the nation's first female president is resonating with many voters, especially women.

HOW WOMEN WILL IMPACT 2016 ELECTION

The possibility that Hillary Clinton could become the nation's first female president is resonating with many voters, especially women. If she wins the election, the once first lady-turned-senator and secretary of state will have shattered the highest glass ceiling of all.

"I think it's about time. Women are great leaders," voter Karen Swartz said.

That's the concept that fueled the Women's Suffrage Movement. Ninety-six years after the 19th Amendment gave women the right to vote, hundreds of them are lined up to decorate the gravestone of Susan B. Anthony, their first female leader.

In Chicago, the ballot is stacked with women from the top slot all the way down to smaller local races. Historic or not - and for it or against - a lot of voters say gender simply isn't an issue they're voting on.

"I think she's just as qualified as anyone else, but I just don't like all the backslapping," said voter Bill Hardt.

"You have examples of women in other countries like Germany, Israel, England," said voter Darryll Schiff.

Currently, one-fifth of the U.S. is represented by women. After Tuesday night, a woman may run the Oval Office next, but it will take a village to bring together the American people after a blistering campaign.