Electric scooter injuries on the rise, less than a week into Chicago's pilot program 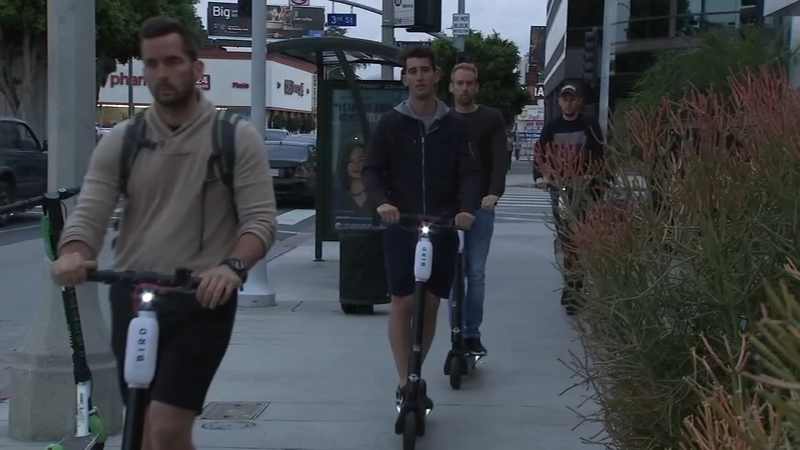 Electric scooter injures on the rise, less than a week into Chicago's pilot program

CHICAGO (WLS) -- Electric scooters have become a popular way to get around, but there are serious risks. It's been less than a week since a scooter program launched in Chicago and doctors said they've seen an increase in scooter-related injuries.

Mary Fraction rented scooters with her family Wednesday in the West Loop. She hit a crack in the pavement and went flying off of the scooter, which landed her at a trip to the Midwest Orthopedics at Rush Thursday.

"I woke up with a swollen hand, fingers looked like a pumpkin, so I knew immediately that I had to come to the doctor," Fraction said.

Fraction was not following the safety instructions and broke her wrist; she was riding on the sidewalk, which is against scooter rules.

"Ironically, as I was leaving the operating room on Monday, after fixing a fracture that had occurred from a scooter, I'm driving through the city and seeing these scooters everywhere, and I'm thinking oh my God it's going to be a busy summer," Fernandez said.

Fernandez said the scooters aren't the problem, it's the public's lack of experience with them and the potholes and flaws in the city's streets, which are not made for scooters. He said since Saturday he's treated four fractures.

"One of the ones that we had was also related to a margarita, so judgement can be an issue as well," Fernandez said. "You have these bars and pubs around, and sometimes people can drink a little bit too much and they'll get on a scooter."

That patient broke her wrist after she had cocktails and then operated the scooter.

Scooters are not allowed to be ridden on sidewalks, and police could issue you a ticket if you are. They can only be used in bike lanes and in the street.

Scooters are limited to 15 mph, and operate only from 5 a.m. to 10 p.m. Scooters cannot be ridden outside of the pilot test zone. If you try to leave the approved area the scooters will slow and then come to a stop.
Report a correction or typo
Related topics:
west loopchicagosafetyscootertransportationdoctors
Copyright © 2022 WLS-TV. All Rights Reserved.
TOP STORIES
10 shot, 2 fatally, on Near North Side
13-year-old carjacking suspect critically injured in police shooting
City Council to take up ordinance on curfew changes
Marine veteran seriously injured in Irving Park hit-and-run
Teen shot and killed in vehicle on Far South Side ID'd by ME
Motorcyclist strikes, kills man crossing street on NW Side, police say
Celebrate National Streaming Day with Hulu for $1/month for 3 months
Show More
CTU votes for new president
Disney celebrates National Streaming Day with drone show over DTLA
City Council committee to vote on NW Side casino plan
Oakbrook Terrace fights back after red light camera permit revoked
Could remains in shrinking Lake Mead be tied to Chicago mob?
More TOP STORIES News