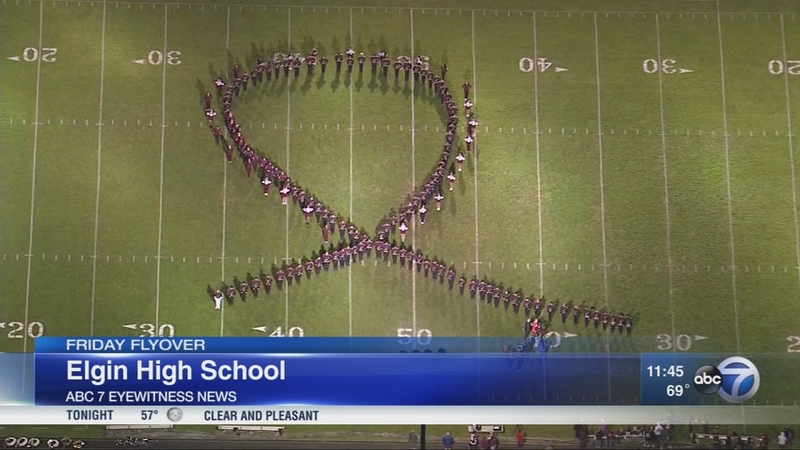 
Elgin will take on Larkin for the Town Jug at 7:30 p.m. Friday at Memorial Stadium!
PHOTOS: Friday Flyover

-There are more than 40 clubs and organizations at Elgin High School, plus 27 varsity athletic teams.

-Our newly renovated Chesborough Field House is one of the largest field houses in the northwest suburbs with a capacity of holding 3,000 people. Our school hallways are a living canvas - large, colorful paintings of the mascots from each class dating back to 1973 are painted on the school hallways. Student murals also adorn several of the school's corridors.

-This weekend the City of Elgin hosts its Nightmare on Chicago Street, a zombie fest with bands, music, lots of food and fun.

Elgin High School, one of the oldest continuously existing public high schools in Illinois, was established in 1869. Beginning with the first commencement in 1872, some 30,000-plus alumni have entered all walks of life. EHS alumni include the following: a Nobel prize winner in chemistry; five admirals of the U.S. Navy; presidents of General Motors, Republic Steel, and the Encyclopedia Britannica; the donor of Chicago's Adler Planetarium; the designer of America's first streamlined train; a television "Emmy" recipient; and a world record holder in the shot put.

In its earlier years the school welcomed the children of German and Scandinavian immigrants. Today, it fulfills the District's motto of "Education for All" by welcoming students from all over the world but predominantly Hispanic students, typically of Mexican origin, as well as students from Poland, India, and refugees from Southeast Asia. This is a comprehensive high school attempting to reach students of varied abilities and backgrounds who seek both vocational training and college entrance preparation.

Elgin's first interscholastic football game was played with the local Academy in 1891. The rivalry with East Aurora, one of the oldest in the state, dates back to 1893. Elgin High has won more than a thousand basketball games since the first contest in 1900, and was the first school to win two consecutive state championships.

-Elgin High School, established in 1869, was one of the oldest continuously existing public high schools in Illinois. Since the first commencement in 1872, some 30,000-plus graduates have gone on to work in all types of careers.

-We enjoy an active Hall of Fame committee and an archive team of alumni that meets nearly each week and keeps our history alive at EHS. Last year we inducted the original 38 members of the Elgin Wall of Fame with framed photos and bios on one of our main school hallways.

-The District has invested in implementing a state-of-the-art Welding Career Pathway that includes upgrades to facilities, alignment to American Welding Society (AWS) standards, and expanding employer involvement in our schools. This year, EHS and the District 2017 are pursuing the AWS recognition to allow students to test and earn industry-recognized work credentials in welding. (EHS will become an AWS-Accredited Test Facility(ATF). )We will be the one of two sites to in the Northern Kane Region to obtain this prestigious designation.

-EHS has about 10 students in dual enrollment courses with Elgin Community College who will be eligible for college credit, as the school, like many others, increasingly emphasizes college and career readiness.

-Recognized by US News and World Report in 2014 as one of the Best High Schools in the State of Illinois.

-2004 Illinois State Teacher of the Year Deb Perryman worked at EHS for 23 years before becoming the U-46 Science Education Coordinator this year.

-Recognized as a Gold Level PBIS School. Working on student behavior through this proactive system that improves school culture.

-Each class chooses their own mascot and then paints a picture of the mascot on the school wall. Last year was a shark, this year is a Cheetah.