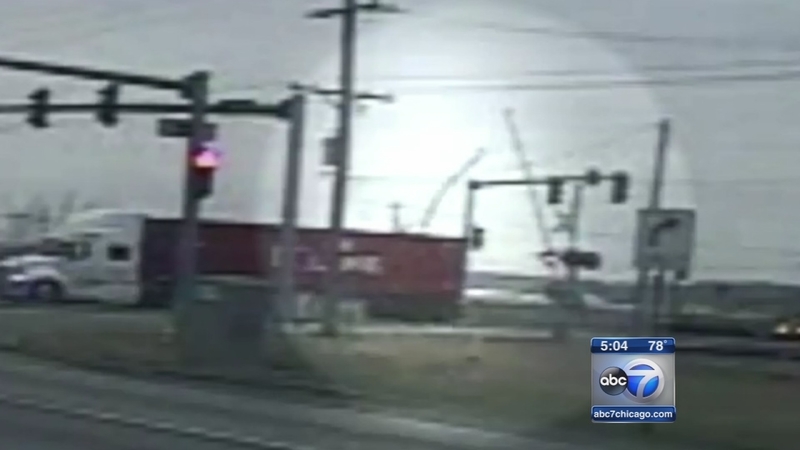 ELWOOD, Ill. (WLS) -- There's a battle brewing over truck traffic at a rail crossing in the small town of Elwood, south of Joliet in Will County. Village and state officials fear it's an accident waiting to happen.

Everyday some 8,000 heavy trucks navigate this rail crossing at Strawn Road and 53. They're going to and from Centerpoint, the largest inland intermodal yard in the country. There have never been any serious accidents here, but Elwood's police chief fears it's only a matter of time.

The crossing sees roughly 20 trains a day - half of them Amtrak passenger trains on a Union Pacific route being prepared for high speed rail. This Elwood police dash cam video shows what sometimes happens when trucks try to beat descending gates here. They get snapped off.

It's not the first time a crossing gate was snapped off here. Police say it's happened 50 times in one year, more than any other crossing in the state.

And there is a further complicating dynamic here. Each day there are 20-30 funeral processions passing this intersection, which leads to the Abraham Lincoln National Cemetery, half a mile south.

"We believe there is an immediate safety need that needs to be addressed," said Jennifer Anderson, attorney for the Illinois Commerce Commission.

The Illinois Commerce Commission is trying to find both short and long-term safety fixes. Elwood attempted to find its own by re-routing the trucks, but Centerpoint went to federal court and blocked that effort.

"The Illinois Route 53 access is the only one that allows trucks in excess of 88,000 pounds," said Mike Scotti, attorney for Centerpoint.

Centerpoint argues that you can't just shut down a high volume intersection- there has to be a regional solution. Elwood argues that this crossing was never designed to handle so massive a load, and that it's only a matter of time before there is more than just a broken gate.

There are a number of suggestions for the short-term: adding another turn lane, setting the crossing gates to drop faster, adding a cop to direct traffic. Elwood's police chief says that's been done and he doesn't think it'll help much. The long-term fix will likely mean some road design or an overpass, and both of those options require time and a lot of money.