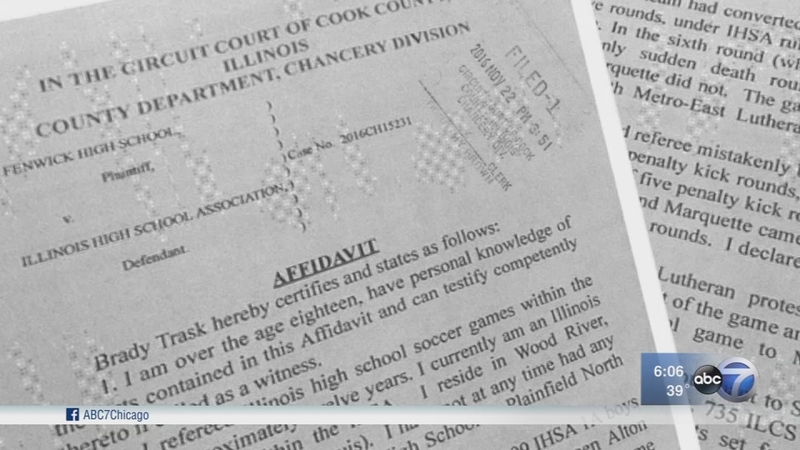 Illinois High School Association board members said it's too late to do anything, claiming their hands are tied. In a statement, the IHSA said "the decisions of game officials shall be final; protests against the decision of a game official shall not be reviewed by the board of directors."

However, they have done it before.

In nearly identical circumstances in 2009, the I-Team has learned the IHSA overturned the results of a state regional boy's soccer final because a referee had made a mistake, allowing the losing team to win.

Late Tuesday, attorneys for Fenwick submitted new paperwork to a Cook County judge that provides details of the IHSA decision from six years ago to reverse the game outcome because of a blown end-of-game call.

In October 2009, the boy's soccer team from Marquette Catholic High School in Alton was playing against Metro-East Lutheran High School from Edwardsville. The newly filed affidavit from a referee who worked that regional game states that a field decision he made mistakenly allowed Marquette to emerge as the victor.

The next day, according the affidavit and press reports obtained by the I-Team, IHSA officials "overturned the result of the game and awarded the state championship regional final game to Metro-East Lutheran," the other team.

This could be crucial during Wednesday morning's hearing in Cook County court because the state's governing high school athletic body has said it has no grounds to overturn last weekend's mistaken ending to the Fenwick-Plainfield North football game, even though there was a botched call by officials.

On Monday, the I-Team broke the story about Fenwick attorneys filing an emergency motion in Cook County to reverse Saturday's game result. They will appear in court on Wednesday to ask a judge to take away Plainfield North's victory and restore Fenwick as the state semi-final winner that IHSA has already said they were.

In a statement late Tuesday, IHSA Executive Director Craig Anderson said: "We are disappointed whenever we are forced to defend the Association's by-laws, which have been voted into existence by IHSA member schools, in the court system, especially when that challenge comes from a member high school. However, given the circumstances surrounding this contest, we understood that it was a possible outcome. We are mindful that in addition to the impact this issue has on Fenwick High School, Plainfield North High School and East St. Louis High School, it also has the potential to overshadow the accomplishments of the other 14 teams who will play for state championships this weekend in Champaign. Given that, we will refrain from further comment until after Wednesday's proceedings."