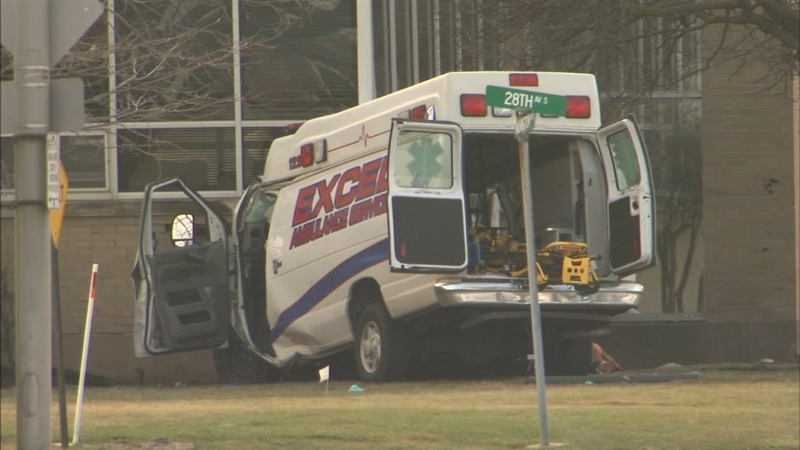 CHICAGO (WLS) -- Both men who were working inside an ambulance that crashed into a building-killing three people-were not properly licensed Emergency Medical Technicians, the I-Team has learned.

Not only was the driver of the ambulance, James Wesley, a convicted felon who was ineligible for the state EMT license he held - but Wesley's co-worker in the ambulance that day was just someone who did odd jobs "like a window washer," according to an attorney for the ambulance company involved.

That second worker in the ambulance, Prentis Williams, was sometimes paid cash to do clean-up work at the ambulance company, according to attorney Frank Nagorka.

Williams, 50 and Wesley, 51, were both killed when their ambulance crashed into a Bellwood building on March 31. A kidney dialysis patient they were transporting, Larry Marshall Jr., 48, also died in the collision.

Illinois state regulations require at least two, properly licensed EMT's to be present on all ambulance runs. The ambulance in the fatal Bellwood crash had zero. Even though the accident occurred nearly four months ago, why that was the case is still not known.

The I-Team reported on Monday that Wesley had cocaine in his bloodstream at the time of the wreck. He also had done prison time for several felonies including drug violations.

WATCH: EMT had cocaine in system at time of deadly ambulance crash

EMT James Wesley, 51, took an ambulance being rehabbed on freelance patient runs and crashed it into a building March 31.

"Excel Ambulance was responsible for their vehicles and they allowed two men, an EMT under the influence of drugs and a man without an EMT license who had no business in the ambulance, to take an ambulance, access protected patient information, and transport Larry Marshall, Jr.," said Robert Curcio, an attorney representing the family of dead dialysis patient Larry Marshall, Jr.

"Excel Ambulance put Mr. Marshall in harm's way by failing to monitor its vehicle and employee," Curcio said on Tuesday after learning of the I-Team's latest revelations.