NEW YORK -- This week Becca and the remaining six men headed to the Bahamas on "The Bachelorette." This is a critical week, as Bachelor Nation knows, because a rose means that guy gets to bring Becca to their hometown. During a heart-to-heart with Chris Harrison, Becca said that she can see this process ending with a proposal. Afterward, Becca showed up at the men's hotel room and told them that the first one-on-one date was for Colton. She took him right away to begin their date. The guys wondered if Colton would reveal to Becca that he's a virgin. Wow, bombshell announcement! I doubt that would be a dealbreaker for her though!

Go get that conch! 🐚💕 #TheBachelorette pic.twitter.com/DNdLkFefdv

Colton and Becca boarded an amazing yacht and she was excited to spend the day with him. She revealed that she's extremely attracted to him and they spent a lot of time kissing. Once they had some time to chat, Colton told her he didn't have a lot of experience when it comes to dating. He was about to reveal his virginity when a guy pulled up on a boat and was taking them conch fishing. Apparently, a part of the conch is called "The Bahamian Viagara." Becca was pretty excited when she heard that, but little does she know, she won't be getting any of that. They each found a beautiful conch shell, and their guide prepared conch salad for them. They each ate the pistol and it seemed really disgusting.


That evening, Becca made a few conch jokes, but then they both said they were very happy with how their relationship was progressing. Colton then told Becca his big news. He said that he's not even sure that his father knows that about him and only a few people know it. He said that he's proud of his virginity and he wants her to know because he sees a future with her. Becca said that she would never want to pressure him or worry him that she would make him uncomfortable about it. She was oddly silent and then walked away for a few minutes. It was a bit weird. I'm not quite sure why this was apparently such a huge deal. She came back to the table and listened to Colton's explanation and then told him that it meant a lot to her. She told him that she appreciates that he takes sex so seriously. Becca offered him the date rose and he said yes!

The next date card arrived at the men's hotel and it read, "Garrett, love is in the air." When the time arrived, he ran over to Becca and gave her a big hug and kiss. A seaplane arrived on the beach for them and they happily boarded for a tour of the island. They had an amazing time on the ride and then landed on a private beach with a picnic. Garrett told Becca it was nice to know that no one could come up and tap on his shoulder on this date. They talked about how infatuated they are with each other and did a lot of making out. 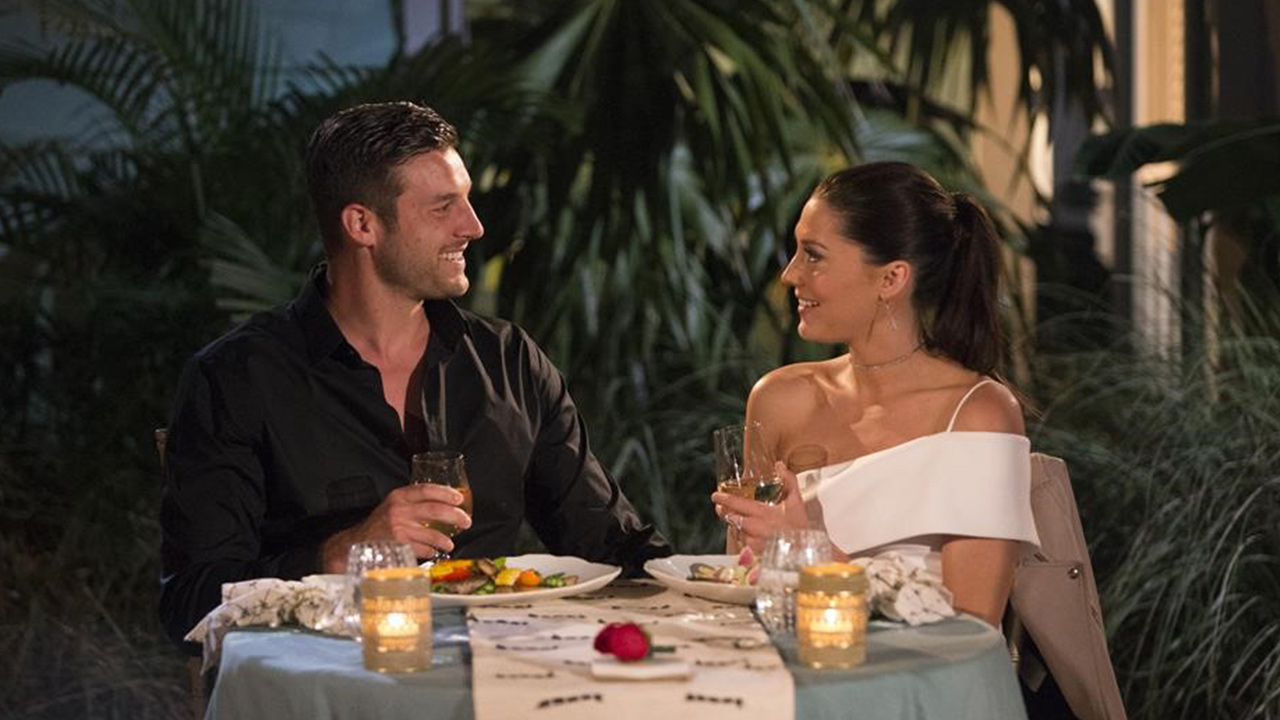 At dinner, Becca asked Garrett why he went through with the wedding to his ex-wife. He said that he really wanted to be a family man and have kids, but she was too much of a hot head. He apparently figured that he could handle it. Garrett said he changed who he was to be with her. Becca told him that she's worried he would push through their relationship and he assured her that he would let her know if something wasn't right. He said if she meets his family, they will raise the red flags for her if there are any. Garrett told her that he loves the way that she looks at him and the way they interact and that he loves it and she's everything that he's looking for in a wife. He added that he's beginning to fall in love with her. Becca told Garrett that made her night and they kissed. Her face lit up and she had tears in her eyes, she was so happy! Becca offered him the date rose and he accepted. 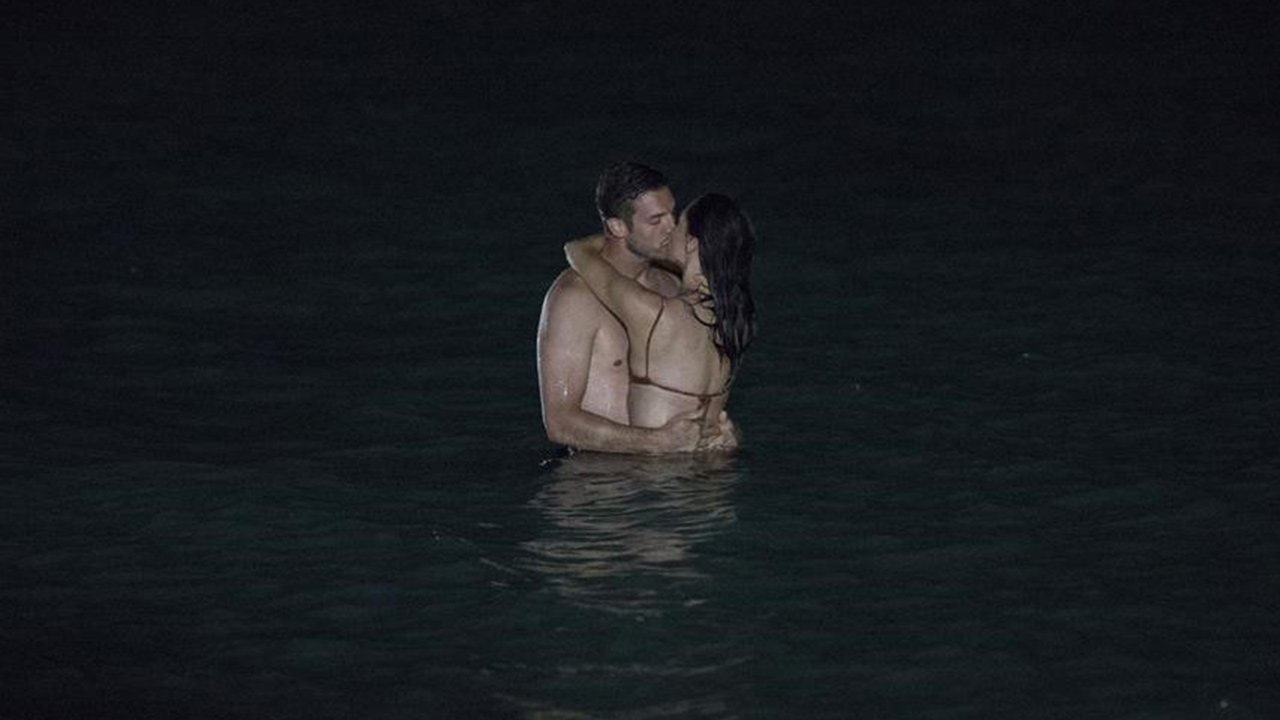 Then, they took off their clothes and did a little night swimming in the ocean! Calm down, they had bathing suits underneath their evening wear. Becca said it was one of her best dates ever.

The final one-on-one date card arrived and it read, "Blake, you make my heart skip a beat." Thank goodness he got it because this guy was teetering on the edge of a breakdown. Blake and Becca met up on a beach where The Baha Men were performing "Who Let the Dogs Out?" Doesn't that scream romance? They heard their new song and danced and kissed at the beach party. Then they spent some time kissing on the beach. Becca and Blake talked about how lucky they are to be in that moment and Blake revealed to her that he was starting to question how she felt about him. He told her it was because he wasn't sure if he would get a one-on-one. Becca said she noticed his disappointment when she arrived to pick up Colton for his date earlier that week. Becca told Blake that she's following her heart and that she cares for multiple people at this point.

“After tonight I can see a forever with him.” #TheBachelorette pic.twitter.com/DsUlKmPHPL

Later on, Becca and Blake went for dinner where they could learn a bit more about each other. Blake said the reasons he has problems with opening up is because his family used to brush stuff aside. Then, he revealed that his mom had an affair with his basketball coach/English teacher. Yikes. His parents got divorced when he was in high school. His friends found out that his mother was moving out of their home and into an apartment before he even did. He said he wants to put family first over anything and doesn't want to have secrets like that going on. Blake told Becca he's way more open with her than anyone else in a long time. Then Blake told Becca that he is in love with her! Becca told him that he was going to make her heart burst! It was a really intense moment. She gave him the rose of course and Blake was really excited that they seemed to be in love with each other. Becca said, "My heart just recognizes his." Becca said that they are on the same page, but Blake doesn't know it yet. She is in love with him too. She says that she can see him 100 percent as her husband.

The date card was for Jason, Wills, and Leo. It read, "These days are never easy..." Well, that's ominous! Leo's hair was all swirled up in a man bun before the date, but then he had it cascading down in brilliant spirals when it was time to leave for the date. The men took a boat to meet Becca on a beach and she was very excited to see them all. If they don't get the date rose on this group date, it means they are eliminated. It's, in essence, a three-on-one date. Becca was kissing all of them, so it was really hard to tell where her heart was heading. Wills and Becca had a great time talking about their families and all of the similarities between them and the way they were raised. Jason and Becca talked about how hard it was to be apart from each other. Leo seemed to kiss Becca's face off at first, it was a bit much! Leo asked Becca if he's had enough time with her to want to propose because he's not ready yet. He thinks that hometowns would be a great time to find out. Becca said if she's being honest, they're not there yet. She told him it's not fair to go to his family if she's not sure. He kind of let her off easy on that one. As she sat between Wills and Jason, she asked them to move on to the evening portion of the date.

Evening fell, and Becca met up with the two men sitting at a table waiting to learn what Becca's decision could be. She pulled each one aside for some conversation and kissing. She asked Jason if he had any reservations, and he said that he doesn't anymore after their last date. He thinks Becca is really special and he thinks their relationship is on the right track. He told Becca that he wants to feel 100% that he loves her before he tells her that, to which Becca said that she finds him a bit risky. I think it's refreshing that he's being very honest with her. Wills and Becca talked about how easy their relationship has been progressing up until this point. He said that he wants to be vulnerable with her and she makes him feel peaceful and calm. Wills said that she makes him believe in love again. He got choked up while talking and he revealed he's falling in love with her more and more every single day. She kissed him but didn't say anything. Becca picked up the date rose as she sat between Wills and Jason and decided to give it to Jason. Wow, she took Wills love and threw it back to him. Becca asked Wills if she could walk him out and explained that she wanted to feel what he was feeling, but she wasn't quite there yet. They weren't on the same page.

Next week, Becca will travel to her final four men's hometowns! It looks like things get pretty intense, and Garrett's family seems a little intense. Tia returns to dredge up some drama with the Colton situation again. So there's a lot coming up that you won't want to miss!
Report a correction or typo
Related topics:
arts & entertainmentthe bacheloretteabccominguproseschris harrisonbachelorettebecca kufrin
Copyright © 2020 WLS-TV. All Rights Reserved.
COMINGUPROSES