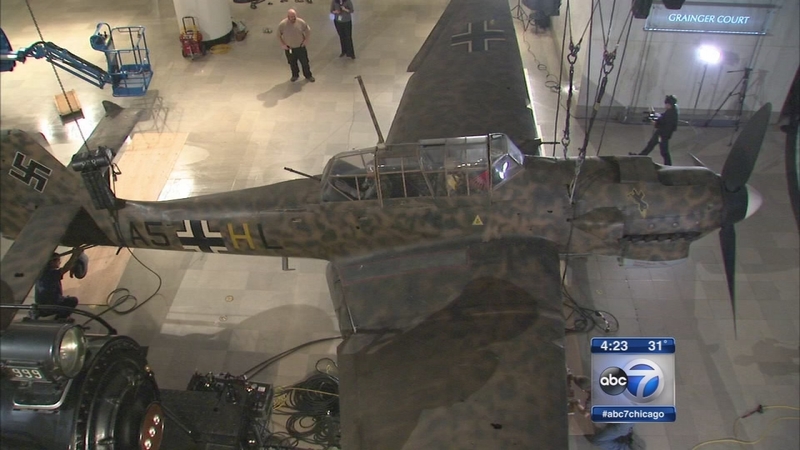 WW2 plane comes down for cleanup

CHICAGO (WLS) -- A big part of World War II history landed at the Museum of Science and Industry Wednesday morning.

The German Stuka dive bomber, one of only two in the world still intact, has been at the museum of science and industry since the late 1940s. Every so often the museum brings the plane in for a little R & R.

"We are lowering our World War II German Stuka plane to the museum floor where we can assess the condition and clean it as part of collection stewardship," Kathleen McCarthy, curator, said.

The Germans made 6,500 of these dive bombers. But this one, like so many others, was shot down. The bullet holes in the 75-year-old plane tell the story of how the war, for this plane, ended in Libya in 1941. The British captured it and then ultimately sent it to Chicago.

The Stuka dive bomber was a big part of the Nazi psychological warfare. It didn't just carry more than 1,000 pounds of bombs, it also had a siren that scared you half to death before they struck.

The Stuka sirens were all silenced by the end of the war and now just a scary part of history. However, soon this plane might reveal new secrets.

"We're going to take this great opportunity to actually 3-D scan the entire plane and get lots more information about the plane. It's structure. How it was built," McCarthy said.

There's a good possibility the Stuka was shot down by a British Spitfire just like the one that hangs behind it at the MSI now.

"We hope to re-hang the ship around February 21. In projects like this the dates can be fluid but right now that's our goal," McCarthy said.

When that happens the Spitfire will still be there right behind him.