Go behind the scenes of 'Dancing with the Stars'

WLS
By Janet Davies
LOS ANGELES (WLS) -- We're taking you behind the scenes to see what goes on before those tangos and foxtrots begin. ABC7's Janet Davies spent a night in the Hollywood ballroom where all the magic happens.

There's a flurry of cast and crew, with last-minute primping and posing. The audience is invited right on stage for a pre dance show party that includes VIP guests.

"The kids are so excited - more excited to see everybody else, they like the girl pro dancers the best," said Hyla Ross, David Ross' wife.

If you think the dancers are stressed out with their routines, the costumers only have four days to design and create these.

"It depends on the song and the theme. Usually we'll go with a color that's more softer, if it's gonna be a really pretty dance. Or if it's gonna be more rock and roll, we use kind of more edgy and studs and stuff like that," costume designer Steve Lee said.

A team of 30 puts the costumes together, but the "rhinestoning" alone takes two days. The style is "provocative," which most of the ladies eventually embrace.

"The show does sort of something to people when you start competing and you're dancing you see the other girls sexy, most women want to be the same!" costumer designer Daniela Gschwendtner said.

"I love athletes and they're always willing to experiment and try things, like we have David, we did the Cubs uniform for him and blinged it out," Lee said. "He was very happy. He said it felt more comfortable than his uniform."

The first elimination takes place Monday night. You can watch "Dancing with the Stars" on ABC 7 at 7 p.m.
Related topics:
arts & entertainmententertainmentdancing with the starsu.s. & world
Copyright © 2020 WLS-TV. All Rights Reserved.
DANCING WITH THE STARS 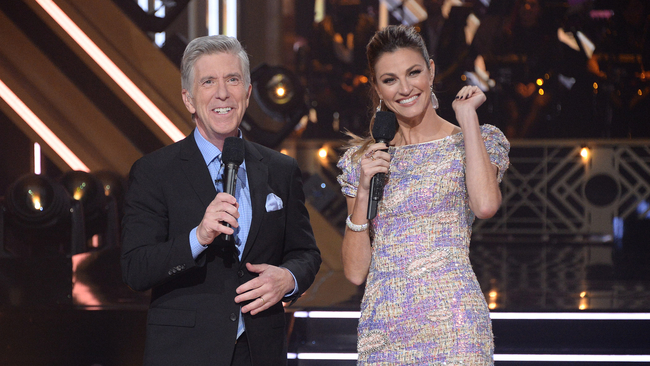