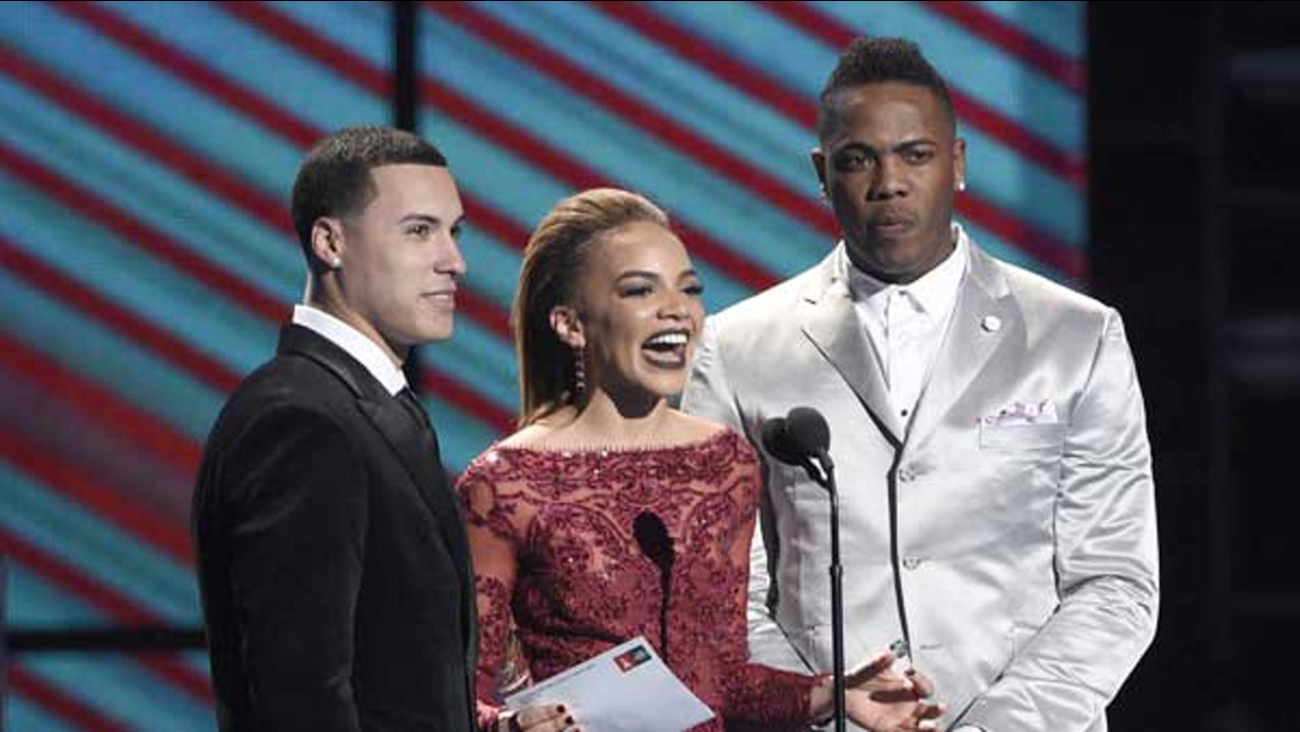 The World Series winners posted photos of the event on their Instagram accounts Thursday night, and even shot a short video together!

Singer-songwriter Juan Gabriel had never received a Latin Grammy Award during his lifetime, but on Thursday, he became a posthumous double winner.

The late Mexican superstar won album of the year and best vocal pop traditional album for "Los Duo 2," a collection of his greatest hits performed by such luminaries of Latin music as Marc Anthony, Alejandro Fernandez, Jose Feliciano and Wisin. A video tribute showed highlights from his decades onstage, and the presenters of the night's final prize called on the audience to "applaud for the master."

Gabriel died in August at age 66.

He was named the Latin Recording Academy's Person of the Year in 2009, and Anthony received the honor this year.

Jennifer Lopez presented the prize, stealing the show with her duet with Anthony on "Olvidame y Pega la Vuelta," followed by a heartfelt speech in which she described her ex-husband as "a living legend." He was feted in a separate ceremony Wednesday but received the award from Lopez on Thursday's show, held at Las Vegas' T-Mobile Arena and broadcast live on Univision.

"Marc, you are a living legend who has laid bare your heart and soul on your musical journey... An artist magical and pure who has given us classics that will stay with us forever," Lopez said in Spanish. "On our own personal and artistic journey, we've learned so much and we've grown so much, and you've always been so many things in my life: my mentor, a twin soul, a father who's not only the Person of the Year, he's the person of all time."

The audience cheered, "Kiss! Kiss! Kiss!" and the former couple obliged with a small peck. Anthony and Lopez were wed from 2004 to 2011. He has been married to Venezuelan model Shannon De Lima since 2014.

Carlos Vives won record and song of the year honors for "La Bicicleta," his duet with Shakira.

Vives, who also performed the song during Thursday's show, thanked "the Spanish-speaking community all over the world" as he dedicated his award to his family and homeland of Colombia. Shakira did not attend the ceremony.

Vives accepted the golden gramophone from singer-songwriter Julieta Venegas and actor-director Diego Luna, whose message of unity among Latinos was an indirect allusion to the rhetoric of President-elect Donald Trump. "Together we can fight hate and discrimination," Luna said. "We are stronger together."

Show co-host Roselyn Sanchez also said, "There shouldn't be walls that separate us," but no one mentioned Trump's name from the stage.

The show began with a strong message in defense of Latinos, as Juanes and Pablo Lopez performed "Tu Enemigo" ("Your Enemy"), backed by a gospel choir and Cirque du Soleil gymnasts. The song includes the lyric, "your hands are my flag and I have a song as my border."

Sanchez repeated the lyric after their performance, saying, "the only barriers that should exist are the songs."

Mexican singer Carla Morrison, who won the Latin Grammy for best alternative song for "Vez Primera," dedicated the award to "all Latinos who are in this country, that the walls would only be mental and we can destroy them and never be separated."

Most awards were given during an untelevised presentation earlier in the day. That's when the late Gabriel won his first Latin Grammy, but presenter Andres Ceballos of the group Dvicio apparently didn't realize it was a posthumous prize.

"He's not here," Ceballos said. "The academy will make sure he receives this award."