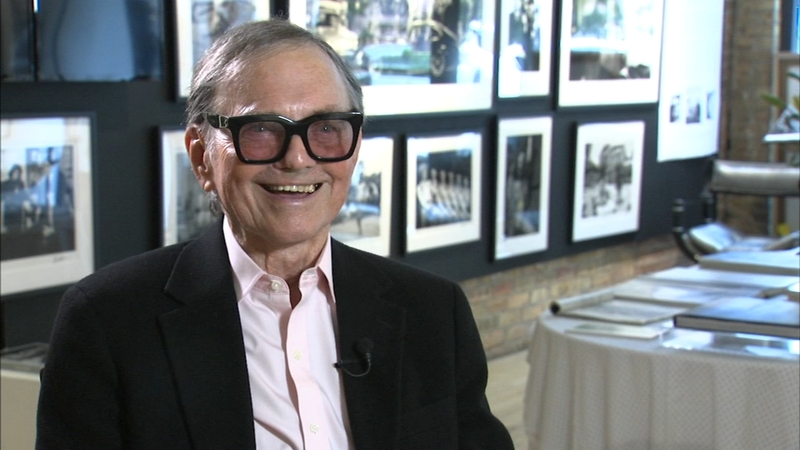 CHICAGO (WLS) -- Julian Wasser has witnessed Hollywood through a camera lens for well over half a century, capturing images of stars from Jack Nicholson to The Beatles, and he even got one of the very last pictures of Robert Kennedy before his assassination.

The view can be seen in a special exhibit, "Julian Wasser: The Way We Were," a photographic time capsule of the 1960's and 1970's.

ABC7 Chicago's Janet Davies talked to him about his new exhibit that opened Friday in River North.

Wasser began shooting spot news in the nation's capital at a tender age.

Julian Wasser: "Every night I would climb out my bedroom window and steal my father's car when I was 12 and take pictures, and they'd be on the front page of the Washington Post. My father would say 'look, there's another Julian Wasser in Washington.' I said 'yeah dad.'"

Wasser: "Most photographers would get a star, line them up against a wall and stand there and don't say anything. They would wait for the star to do something, I can't stand that. They want direction. I gave lots of directions. They liked that and worked well with that. That's why pictures look the way they do."

Wasser's career has spanned over six decades, and each of his iconic photographs has a story.

Wasser: "The Beatles, which was taken in London in Soho. Jayne Mansfield was at the Whiskey, I was shooting for Life Magazine. David Bowie, I was working for him, shooting at the Hollywood Bowl at one of his concerts."

Janet Davies: "How about that Hugh Hefner photo on roller skates?"

Wasser: "He had incredible luck with women, didn't he? He was actually a very, very nice guy, very sweet guy, he treated those girls like queens.

Davies: "What about the Marilyn one?"

Wasser: "I wanted to look at her, so I sat at her feet like a lap dog and took the pictures; she didn't even know I was there, she's a star!"

Wasser's iconic photos are on display at the Hilton-Asmus Contemporary Gallery through September 30th.

"Julian Wasser: The Way We Were" runs through September 30th at the Hilton-Asmus Contemporary Gallery.