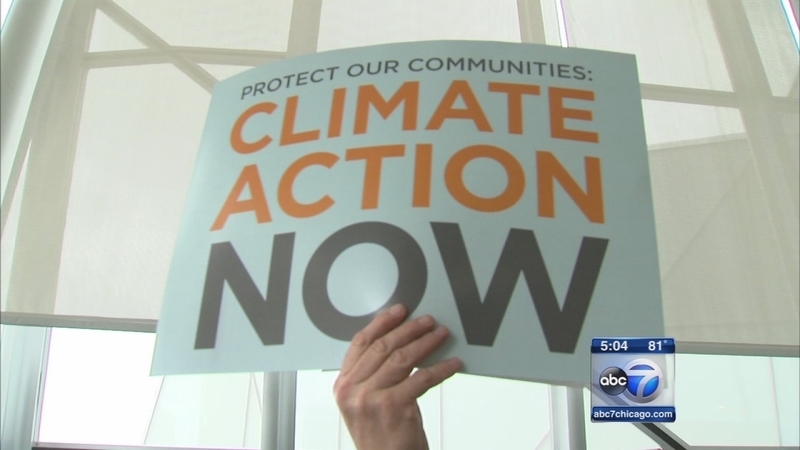 CHICAGO (WLS) -- Illinois officials say the state is well-equipped to meet new power plant emissions goals. The Obama Administration unveiled a plan Monday to cut carbon dioxide emissions from power plants by 30 percent by the year 2030. It sets the first national limits on carbon dioxide and will further diminish the use of coal in electrical production.

The proposal sets off a complex process in which the 50 states will each determine how to meet customized targets set by the EPA and then submit those plans for approval.

"It is important that we take serious, comprehensive action to reduce carbon emissions," said Illinois Attorney General Lisa Madigan, "so I look forward to reviewing the draft guidelines of the federal plan in detail and helping to develop a flexible and effective approach for Illinois."

Illinois was given the goal of cutting emissions by 33 percent from 2012 levels, which would reduce output to 1,271 pounds per megawatt hour.

Illinois Commerce Commission chairman Doug Scott told reporters last week, "We think we have a good program and will look for ways to make it better."

Senator Dick Durbin expressed his support for the rule in a statement today saying, "Communities in Illinois are already leading the nation in choosing power that is renewable, affordable and clean. I will continue to support these efforts and other investments in innovative technologies, such as FutureGen 2.0, that create Illinois jobs now and invest in clean energy sources for the future."

Some of Illinois' coal-fired power plants have already added pollution-control equipment or switched to cleaner-burning natural gas. The state also has 11 nuclear reactors, is expanding renewable energy sources including wind and solar power and there are efforts to encourage energy efficiency.

In 2012, according to federal statistics, almost 49 percent of Illinois' power came from nuclear sources and 41 percent came from coal-fired power plants. Wind energy supplied about 4 percent and natural gas just under 6 percent of power. State officials also passed a bill in late May that would provide millions of dollars for the Illinois Power Agency to invest in solar power.

Some elected officials expect pushback from their colleagues who claim this is an overreach from the White House. Congressman Mike Quigley said, "People say the president is taking such a bold step. This isn't something he should do. Let me tell you something: if he does do it, this House isn't going to do it."

But not everyone is happy with the President's actions. Illinois Coal Association President Phil Gonet said, "The country should not come up with constraints on carbon dioxide emissions until the technology has been developed, proved and deployed. And we're not at the point yet."

Mark Denzler, vice present and COO of the Illinois Manufacturer's Association reacted to the announcement, saying in part, "President Obama's plan will eliminate thousands of Illinois jobs and increase costs for families."

Environmentalists say warnings about job losses and energy shortages are overblown, because coal-fired plants will have to develop cleaner technology to stay in business, while renewable energy will continue to create jobs.

"When the nation adopts standards that require businesses to take responsibility for the cost of pollution, engineers and innovators take over," said Howard Lerner, executive director of the Environmental Law and Policy Center.

The rule is expected to be finalized next year.